My favourite ‘read-in-one-night’ book of this month is My Salinger Year.

It was that title which first caught my attention. Mmmm someone has met the elusive writer, or perhaps spoken to him briefly, enough anyway to write a book with his name in the title? And so I picked up Joanna Rakoff’s memoir of her early years working for a literary agency, the one that represents J.D. Salinger. In the book Rakoff is twenty-three, just out of grad school and determined to learn everything she can about the agency world. At the same time she’s busy writing poetry and living with a surly, self-opinionated boyfriend (my take on the boyfriend, not hers). And then one day her phone rings and she gets to speak to J.D. Salinger. The reader takes a deep breath along with Rakoff and off we go on a gently unfolding journey.

It really is a grand time of year for readers of non-fiction. I only have to take a short pause after finishing Joanna Rakoff, before I turn to three books on my desk vying for attention.

Nick Hunt has started me out on what will I feel be a glorious trek across Europe. In Walking the Woods and the Water, Nick brings a dream to reality. He has promised himself that ‘one day’ he will follow in the steps of iconic travel writer Patrick Leigh Fermor, and now he has turned thirty, it is now or never. The acclaimed nature writer Robert MacFarlane has wonderful things to say about this book, and I will always listen to Robert MacFarlane after having read about his own walking experiences in The Old Ways: a Journey on Foot.

The other books yet to be opened but excitement building in anticipation are Digging for Richard III: how Archaeology found the King by Mike Pitts and (this one also wins the award for longest title) Off the Map: Lost Spaces, Invisible Cities, Forgotten Islands, Feral Places and What They Tell us About the World by Alastair Bonnett.

Bronte is reading Andre the Giant by Box Brown

Andre the Giant presents a pastiche of stories and legends about Andre Roussimoff, known as both the lovable giant in The Princess Bride and as a heroic pro-wrestling figure.

As someone viewing his life story for the first time, I found the story compelling and moving. The structure is disjointed which felt jarring at times - one reviewer writes “it can feel like the book’s structure mimics a string of pearls, each separate episode in Andre’s life standing by itself on the string, leaving the reader to connect the pieces and find the overarching themes”. By presenting Andre’s kindness and cruelty plainly with clear eyes, Brown humanises the ‘giant’ without ever seeming to try make him something he isn’t. Ultimately the portrait he creates feels true, and it was a truth that resonated with me after finishing the last few pages.

As we steel ourselves for winter I have the perfect escape for young adult readers: a British novel about surfing.

Bear with me. I first read Lisa Glass in her 2007 small press debut Prince Rupert’s Teardrop, about a woman searching for her elderly mother, a survivor of the Armenian genocide of the early 20th century. It was vivid, strange and so original. I loved her writing. A few years later I picked up Glass’s self-published ebook, Snake Beach, her first foray into young adult fiction. Although it had its flaws what struck me again was this wonderful voice, down-to-earth characters, and again the originality.

So I was really pleased to learn that she’d stuck with young adult and been picked up by Quercus for Blue, my current squeeze, just out in the UK and soon to reach our shores. It’s about a keen surfer called Iris who, post-messy break-up, meets a gorgeous, enigmatic fellow surfer called Zeke during a yoga class (cue desperately trying not to fart during Downward Dog). Zeke has a mysterious past, so naturally the course of true love will not be running smoothly. If that sounds fairly standard, I feel certain that it won’t stay that way.

This is the first in a contemporary romance series, so it’s a good one to check out if multiple dystopian series have been wearing you down. 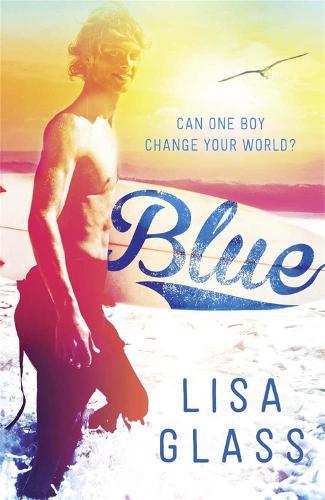