What are the current members of the BSC reading?

It’s official. We are head over heels in love with the new The Baby-Sitter’s Club adaptation currently streaming on Netflix, especially the ways in which it has been freshened up for a new audience.

While we don’t know for sure what the Gen Z Kristy, Mary Anne, Claudia, Stacey and Dawn are really reading, we’ve taken our best guess – and, of course, we have a few book recommendations for them.

Kristy is the president of the Baby-Sitter’s Club, as she likes to remind everyone at every possible opportunity. With her direct, go-getting and ambitious personality we think she’d gravitate towards stories about leadership, sports prowess, and adventure.

She’s already reading The Art of War to get tips on defeating the evil Baby-Sitter’s Agency but we also think she’ll soak up some career advice from her favourite Supreme Court judge, Ruth Bader Ginsburg, in Pocket RBG Wisdom.

For sheer thrills she’s reading Matthew Reilly’s The Secret Runners of New York and the new Hunger Games novel, The Ballad of Songbirds and Snakes, as well as stoking the fires of her feminist and sporting interests with Break the Fall by Jennifer Iacopelli. And even though it will require a bit of a lesson about Antipodean football, Kristy is loving More Than a Kick by Tayla Harris.

If we were recommending a book to Kristy, we might suggest Taking Down Evelyn Tait by Poppy Nwosu. We think she’d relate to a protagonist who goes to Machiavellian lengths to hold onto her best friend.

Look, we have to acknowledge up front that uber-artistic Claudia is such a visual person that she doesn’t spend loads of time with her head in a book, and in fact probably is spending most of her reading time on Teen Vogue.

However, she’s really inspired by Frida A to Z, a visual walk through the life of one of her favourite artists, and the amazing illustrations Japanese-American artist Yayoi Kusama did for Lewis Carroll’s trippy classic, in Lewis Carroll’s Alice’s Adventures in Wonderland.

Claudia also loves dipping into graphic novels! Jen Wang’s Stargazing is a favourite, as she relates to the free-spirited and imaginative Moon, and she also loves the modern re-telling of Little Women in Meg, Jo, Beth and Amy, because it reminds her of her own girl gang.

Finally, Claudia’s reading is often based on her many art projects, and she loved reading Lucy Peach’s Period Queen when she was working on her menstruation artwork (a book she passed onto Kristy, for her Big Day).

If she can sit still for long enough to read a novel, we think she might like Clementine and Rudy by Siobhan Curham, for its focus on friendship and art. Plus, given her major sweet tooth, we recommend that Claudia flick through Yotam Ottolenghi and Helen Goh’s Sweet (and then convince Mimi to cook her something).

Mary Anne is secretary of the club due to her ‘exceptional organisation skills and neat handwriting’. She’s a gentle, dreamy soul who always believes the best of others, and is initially seen as being more babyish than the other girls. Despite her many talents, she often feels insecure, and cries easily, not realising that empathy is arguably a strength more than a weakness.

What can we say? We have ourselves a fantasy lover here. Mary Anne’s bookshelf contains such magical reads as Jaclyn Moriarty’s whimsical The Slightly Alarming Tale of the Whispering Wars, and Rin Chupeco’s myth-soaked Wicked As You Wish. Contemporary middle fiction would also have its place there, and we’re picturing the wonderful Blended by Sharon M. Draper in the mix.

Mary Anne has also definitely read all the classics, more than once, and her love of Broadway has no doubt seen her snap up a copy of Dear Evan Hansen. Mary Anne is a skilled knitter with a couple of projects on the go – alongside a book to provide inspiration, such as popular YouTuber Vickie Howell’s The Knit Vibe.

If we were asked to recommend her a book, our pick would be the brand-new graphic novel adaptation of Octavia E. Butler’s classic, Parable of the Sower, which would hopefully help her think about her own empathy in a new way. We’d also love to see her discover Brittney Morris’s sci-fi thriller, SLAY, as she continues to explore her tastes growing up.

A former Upper West Side-dweller, Stacey is smart, sophisticated, and vivacious. While she may not seem a bookworm from the outset, her time spent in and out of hospital – coming to terms with and learning how to manage her diabetes – would have given her ample time to discover books and fall in love with them. She may also be a little boy-crazy…

Stacey loves romance novels and as per her worldly air, she leans towards YA pitched a little older. Think To All the Boys I’ve Loved Before by Jenny Han, It Sounded Better in My Head by Nina Kenwood, and novels by Melissa Keil, Becky Albertalli, Sandhya Menon, Nicola Yoon, Simone Elkeles and Jenna Guillaume. She’s slowly reading through the anthology Rookie On Love, and Jenny Lee’s Anna K is making her homesick for NYC. Stacey also reportedly went through a Harriet the Spy phase as a younger child, and she still harbours a passion for crime stories. She’s most definitely read One Of Us Is Next by Karen McManus.

Stacey is cool under crisis, and seems to have an innate sense of style and fashion. As well as romance, we also see her gravitating toward non-fiction books from and about interesting young people who might inspire her. Memoirs from YouTube stars or exciting designers may appeal, or a book like This Is 18, which shares 21 empowering and uniquely personal profiles of young women from around the world.

Finally, if we were recommending a book to Stacey, we’d want to suggest Sick Bay by Nova Weetman. Even though it’s pitched slightly younger than her normal tastes, we’d love her be able to read about another person with type 1 diabetes and an overprotective mum.

Californian Dawn is new to Stoneybrook, and immediately impresses with her relaxed charm, informed attitudes and ability to throw herself into the fray for a cause she believes in. She gravitates towards books that explore activism and important social and political issues, and has recently enjoyed Dara McAnulty’s Diary of a Young Naturalist, Yes No Maybe So by Becky Albertalli and Aisha Saeed, and Clap When You Land by Elizabeth Acevedo.

And let it be said, Dawn is not afraid of anything witchy or New Age. She loved Zoraida Cordaiva’s Brooklyn Brujas series, so she’s excited to get her hands on Cordova’s new book, Incendiary, as well as The Dark Tide by Alicia Jasinska. And you just know she believes in self-care, so she’s probably also working her way through Me Time.

Our recommendation for Dawn is Rebecca Stead’s The List of Things that Will Not Change, because the main character sees her therapist regularly, and also has a dad who is gay. 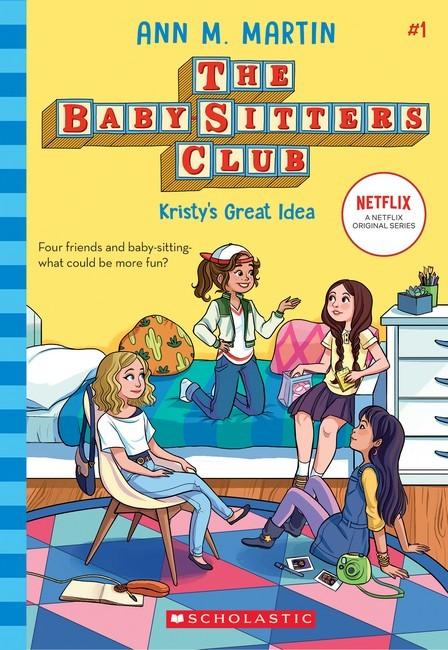 END_OF_DOCUMENT_TOKEN_TO_BE_REPLACED

The Truth about Stacey (The Baby-Sitters Club, Graphic Novel 2)

Dawn and the Impossible Three (The Baby-Sitters Club, Graphic Novel 5)

END_OF_DOCUMENT_TOKEN_TO_BE_REPLACED

Claudia and the Phantom Phone Calls (The Baby-Sitters Club, Book 2)

The Truth About Stacey (The Baby-Sitters Club, Book 3)

Dawn and the Impossible Three (The Baby-Sitters Club, Book 5)