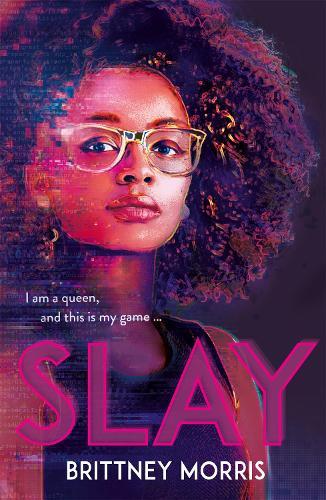 By day, seventeen-year-old Kiera Johnson is a college student,  and one of the only black kids at Jefferson Academy. By night, she joins hundreds of thousands of black gamers who duel worldwide in the secret online role-playing card game, SLAY.
No one knows Kiera is the game developer - not even her boyfriend, Malcolm. But when a teen in Kansas City is murdered over a dispute in the SLAY world, the media labels it an exclusionist, racist hub for thugs.        With threats coming from both inside and outside the game, Kiera must fight to save the safe space she’s created.
But can she protect SLAY without losing herself?

Welcome to the universe of SLAY, a virtual-reality card game designed exclusively for black players. In SLAY, kids across the world log-in to duel as powerful heroes in a vast, online Wakanda designed just for them. SLAY is the anonymous creation of teen developer Kiera Johnson, a young genius who manages its servers in total secrecy from her family, friends and boyfriend. However, when SLAY is implicated in a real-life murder, Kiera’s beloved creation becomes the focus of media outrage, racist profiling and accusations of ‘anti-white discrimination’. As Kiera is dragged into the public sphere, she and her inner circle grapple with questions of online culture, safe spaces, and black identity.

SLAY is a bombastic and thrilling jaunt into the boundless possibilities of geekdom and virtual worlds, flexing a unique game-system and tense virtual battles which left me exhilarated and wishing I could log in to play. This fast-paced action is carefully balanced with a reader-conscious exploration of the complexities of race and cultural identity, while also highlighting very real issues in gaming and contemporary online culture.

It is no secret that the real-world gaming community has major issues with racism. Increasing diversity in games is routinely met with severe backlash, if not outright threats and harassment. Safe spaces, like SLAY, are a refuge away from this toxicity, but also targets for its continued hate. However, these spaces are also environments where a shared identity can be explored and deconstructed in interesting, often confronting ways. SLAY navigates these issues with impressive clarity, striking the rare balance between deliberate commentary and unadulterated, unapologetic fun.

Georgia Phelan works as a bookseller at Readings Doncaster.