Sarah Holland-Batt on how travel energises her poetry

Poetry collections are most often gatherings of miscellanea, assemblages of thoughts and ideas and arguments curated over a period of years, textual cabinets of curiosities. This makes it difficult to think of the poetry collection as a fully unified animal – straddling, as it does, different times and places, the different selves who wrote the poems, those who were in love and those who had fallen out of it, and so forth. All of which is a roundabout way of saying that a book of poetry rarely has a single idea at its heart – poems are animated by change, and each new poem must say something different than the last. Poetry, after all, is fundamentally of the moment; a collection, then, is a series of moments, like a photo album, each documenting intervals of change.

That being said, when I think of my most recent book, The Hazards, and of what drives its poems, what energises them and what keeps them moving, the idea I return to is travel. Movement has always been at the centre of my life – over the years I have swung backwards and forwards between the hemispheres like a pendulum, moving to the United States and back again, and again – and the twin poles of departure and return, belonging and exile, here and there are at the irreducible core of my writing. I don’t know who I am when I’m not travelling; I have an inherently restless temperament that makes me a better poet than a prose writer – I love beginnings and endings above all.

The Hazards arose out of a vast itinerary. Poems in the collection were written in Italy, in Egypt, in Nicaragua, in Cuba, and the United States. They were written on rainy balconies in Costa Rica and on bright summer nights in Anchorage, during frozen New York blizzards and spring train rides across Hungary. In my mind, the lyric poem shares much with the best aspects of travel – the condensation of a constellation of thoughts into a single place and time, a moment where everything comes together, and then is gone again. Travel is, above all, about the ephemeral, the unquantifiable moment that coalesces and then dissipates. And this is the space in which my mind works best – surrounded by the rush of a new city, an anonymous hotel room, a clean space where the mind is free to think, unencumbered by the quotidian. There are, of course, poets who make whole bodies of work out of that very material – but due to the circumstances of my life, where travel and movement have, from a very young age, underwritten a primal tempo, I find I work best when I am away. ‘I move,’ as Mark Strand once wrote, ‘to keep things whole.’

That being said, I do not see the poem, as Eliot did, as an escape from personality. To me, travelling – the act of moving, the act of knowing your body is accelerating through time and place – brings me most forcibly in contact with myself. It is the place where I am able to see my life most clearly for what it is, against the stark white background of the unknown. Home, or the familiar, lulls me; travel wakes me up, shakes me out of the ordinary and into something new and strange. And so that is where these poems live – between cloud forests and coastlines, museums and public parks, between Europe and the antipodes, and New York, Brisbane, and everywhere in between – and somewhere, located between all these extremes, between these dizzying points of navigation, lies the self.

Sarah Holland-Batt is an award-winning poet, editor, critic and academic. The Hazards is her second collection of poetry. 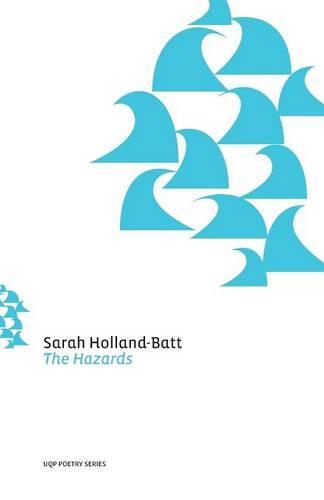