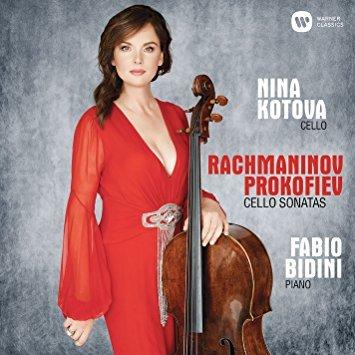 Cellist, Nina Kotova, praised by Gramophone magazine as a “strong and individual artist [whose] depth of feeling and technical control are never in doubt,” here partners with pianist Fabio Bidini in two landmark Russian sonatas from the 20th century.
Rachmaninov’s in G minor and Prokofiev’s in C major, and in two smaller pieces by Tchaikovsky.

While purists may object to the cellist’s unorthodox interpretation of Bach, there can be no doubt that she is right at home with the music of her countrymen. Originally composed for Mstislav Rostropovich, Prokofiev’s brilliant Sonata for cello and piano in C, Op. 119 provides Kotova the opportunity to demonstrate the full breadth and depth of her instrument. Haunting is the low and grave cello solo at the beginning of the first movement, which is quietly joined by a lilting piano accompaniment. The serenity eventually gives way to become something altogether more Prokoviefian – unpredictable, fiery, jocular, and virtuosic. Kotova and Bidini’s bold interpretation is, to my ears, a remarkable achievement.

Rachmaninov’s Sonata for cello and piano in G minor, Op. 19 is equally dramatic, and altogether more lyrical. Both cello and piano are given equal prominence, and the sonata therefore requires two equally virtuosic instrumentalists, best demonstrated in the final movement marked Allegro mosso. Here, Bidini approaches with skill and abandon Rachmaninov’s challenging piano writing, to which Kotova responds with alternating energy and tenderness, as the score dictates. A highlight of the disc is the closing Meditation by Tchaikovsky which, while brief, showcases the beauty, expressivity and elegance of Kotova’s playing. Although worlds apart from the intimacy of the Bach album, I’ve no doubt listeners will enjoy Kotova’s epic survey of the Russian cello repertoire.