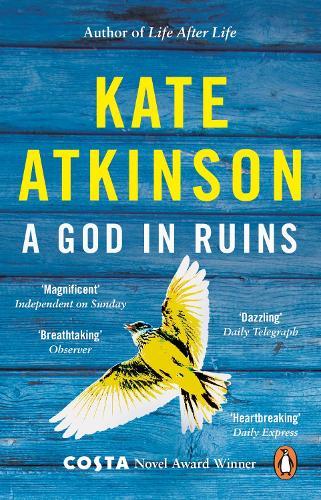 Winner of the Costa Novel Award 2015

A God in Ruins relates the life of Teddy Todd - would-be poet, heroic World War II bomber pilot, husband, father, and grandfather - as he navigates the perils and progress of the 20th century. For all Teddy endures in battle, his greatest challenge will be to face living in a future he never expected to have. This gripping, often deliriously funny yet emotionally devastating book looks at war - that great fall of Man from grace - and the effect it has, not only on those who live through it, but on the lives of the subsequent generations. It is also about the infinite magic of fiction.
Those who loved the bestselling Life After Life will recognise Teddy as Ursula Todd’s adored younger brother - but for those who have not read it, A God in Ruins stands fully on its own. Few will dispute that it proves once again that Kate Atkinson is one of the most exceptional novelists of our age.

Life After Life is one of my favourite books of all time, so it was with some trepidation that I approached A God in Ruins. I was rewarded with feelings of foolishness: after all, with Atkinson you are in skilled hands. There is no need to doubt whether Atkinson can hold her own with a fresh take on the tale of the Todd family. She is a magnificent writer, and A God in Ruins is a beautifully structured novel with a breathtaking narrative.

Atkinson continues the story of the Todd family but from the perspective of Ursula’s younger brother, Teddy. As in Ursula’s story, we encounter the war and the Todd family’s eccentricities, this time through Teddy’s eyes. We are also privy to his loves and disappointments, the choices made and bedded. The story is structured differently to Life After Life, but again there is no linear time line. Atkinson leaps from decade to decade, from year to year: each segment told with the grace necessary for illustrating the consequences of past decisions as they present years later. Atkinson’s writing consistently illustrates the vulnerability of humanity through familiar stories and it is this skill that secures her place as one of the most remarkable story tellers of our time.

A God in Ruins is a novel that can be read without Life after Life; the story is told as a companion rather than a sequel. Nevertheless, your imagination will be richer for having both books by your bed.