The best junior fiction books of 2015

Here are our top ten junior fiction (ages 5 to 9ish) books of the year, voted for by Readings staff. Displayed in no particular order.

Who said the bad guys always have to be bad? Maybe they want to have a go at being good too. At least, that’s Mr Wolf’s plan when he rounds up his bad buddies Mr Snake, Mr Shark and Mr Piranha, but being the good guys isn’t as easy as it looks. Aaron Blabey’s graphic-novel style book is hilarious, and the perfect enticement to hook kids aged 6 and up on reading.

The Cat with the Coloured Tail by Gillian Mears & Dinalie Dabarera

This is a mysterious little fable in enticing gift-book format about an ice-cream seller and his cat. Mr Hooper makes the most dreamy, creamy ice creams and the cat with the coloured tail finds the people most in need of his magical confections made with love. But a very small, very sad, black heart is calling the cat too, and such blackness is almost overpowering. A gentle tale to read aloud or for ages 7 and up to read for themselves.

Travels of an Extraordinary Hamster by Astrid Desbordes & Pauline Martin

Featuring space travel, Antarctica, love letters and picnics, this full-colour graphic novel gathers together a collection of short comics about a group of animal friends who will no doubt have you snorting with laughter along with your child. It’s impossible to not be charmed and delighted by Hamster, who is a selfish, egotistical, utterly thoughtless creature, and perfectly balanced by the other animals’ sweeter natures, especially Mole’s!

Mango and Bambang: The Not-a-Pig by Polly Faber & Clara Vulliamy

This truly delightful book is a perfect package. A gorgeous little volume that tells the story of an unconventional but adorable friendship between a young girl, Mango, who is good ‘at all sorts of things’, and a lost tapir, Bambang. One of the things Mango turns out to be good at is comforting Bambang who is terrified of the busy, scary city he finds himself in. Mango has to be brave for both of them as she attempts to assimilate Bambang to apartment and city living. Charming illustrations make this a perfect story for ages 7–9.

My Father is a Polar Bear by Michael Morpurgo & Felicita Sala

Heartfelt and funny, My Father is a Polar Bear is based on the story of Morpurgo’s own discovery of the identity of his father (as the world’s most impressive polar bear!). Captivatingly written and accompanied by simple but beautiful illustrations, it is a story of families and childhood discovery for ages 8–10.

The Squishy McFluff series is utterly adorable! Starring Ava and her imaginary cat, these naughty rascals get up to all sorts of playful mischief. In this latest instalment, Ava is whisked away to her Nana Dot’s house when her mum goes into labour. Turning Nana Dot’s hair green is just one of their escapades, but it’s not as exciting as meeting the baby sister that mum made! A comical and rhyming verse story.

The Day No One Was Angry by Toon Tellegren & Marc Boutavant

Why do we get angry? And when we are angry, why do we stay that way? Readers and listeners will cackle with delight at the problems that confound a cast of animals including an elephant, a lobster, a squirrel and fox all wound up with fury. Marc Boutavant’s artwork shares the same light touch as Toon Tellegen’s text in book that is both beautiful and wise. For ages 6 and up.

Unicorn on a Roll: Another Phoebe and her Unicorn Adventure by Dana Simpson

Phoebe and Heavenly Nostrils the unicorn are best friends – and not just because of the magical wish that Phoebe was granted that forced the unicorn to become her bestie. They really do listen to one another, discuss the outrageous behaviour of Phoebe’s rival, Dakota, and ponder life’s big questions together. This book celebrates a beautiful friendship between a girl and a unicorn while also being very funny and just a little bit profound. It’s perfect reading for unicorn lovers aged 7–11.

When I am Happiest by Rose Lagercrantz & Eva Eriksson

Today is Dani’s second-to-last day at school and she’s trying to think of a way to finish her book about how happy she always is, but before she can think of anything she is taken out of class and told that her dad has been in an accident. Luckily for Dani (and us!), her friends and family are there for her and both her book and ours have a happy ending.

The Bolds by Julian Clary

I loved this outrageous tall tale of a couple of English speaking hyenas in human disguise having amazing adventures in suburbia. It’s laugh-out-loud funny, clever and witty with just the right amount of naughty bottom humour! Lots of great illustrations also bring an extra layer of fun to a story that’s guaranteed to have young readers laughing hysterically at the madcap antics. A comedy riot for the whole family and highly recommended for ages 6 and up. 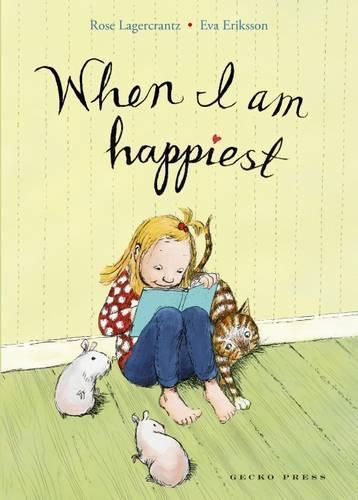 When I Am Happiest

END_OF_DOCUMENT_TOKEN_TO_BE_REPLACED

When I Am Happiest

Mango & Bambang: The Not-a-Pig (Book One)