With Melbourne’s Reading Matters all wrapped up and some brilliant new Australian releases, the month has been dominated by young adult fiction. Emily Gale gives us her picks with a few added gems for younger readers too.

I’ll start with a rapid round-up of YA conference Reading Matters, which took place over three days at the State Library of Victoria and RMIT. For YA fiction fans (of the teen and formerly-teen varieties) it was a real celebration. The overseas guest authors were a huge hit. Raina Telgemeier, a graphic novelist from the US, was a stand-out with Smile and Drama (suitable for younger readers too), while Keith Gray flew in from the UK and was not only an inspiring speaker about censorship but also a bit of a stand-up comedian. His novel Ostrich Boys was another runaway success at the conference. Libba Bray (The Diviners) was an asset to all her sessions – she’s a scream. Established Australian authors and rising stars were a great mix. We were so busy in the pop-up shop that I missed a lot of good stuff, which is why I was thrilled to see that Australian YA blogger extraordinaire, Danielle Binks, had written up the whole thing. At the end of this post there’s a collection of the most popular books represented at the conference.

There’s been a lot of talk about book covers lately. It’s a conversation that’s always simmering but US YA novelist Maureen Johnson really got things going when she called for people to redesign famous books as if the author were the opposite gender. It was proof, if any more proof were needed, that a lot of book cover design is bogged down by cliché and tired old messages about what men/women want.

These kinds of messages about who a book is for start very early on, from the nauseating pink (fairies! cupcakes!) activity book ‘for girls’ and blue (trucks! pirates!) activity book ‘for boys’ that we booksellers are presented with month after month to all the contemporary YA fiction that seems designed to give the message that stories about relationships and families are FOR GIRLS and stories about just about anything else are FOR BOYS (but it’s okay everyone because girls will read those, too, they don’t mind!). If I sound exasperated by the whole thing it’s only because I am. Maybe we need a year of completely plain covers where the titles and blurbs have to do all the selling. It’s not that I want to put designers out of work but in the children’s department at least it feels like we need to start again with a clean slate.

So with that in mind, I was attracted to the design of The Bone Dragon, a debut YA novel by Alexia Casale. This is a really moving – and angry – story of a teenager recovering from an abusive childhood, the precise details of which are left for the reader to imagine. Her talisman is a tiny dragon that she’s carved from a piece of her own rib, and through the magical realism element of the book we come to understand the level of her anguish.

The main character’s young teen voice will appeal to readers from around 11. I think Alexia Casale really captures the child versus adult world – it’s difficult to present such mature subject matter but I think she pulls it off.

There’s more difficult subject matter in Fiona Wood’s second novel, Wildlife. Here, the narrative is shared by two teenage girls who are away from home for a term on an outdoor education programme. It’s a brilliant set-up. Sixteen-year-old Sibylla begins the term with new-found fame, somewhat reluctantly gained, as her face has been used in an advertising campaign. Her school status instantly changes. Her co-narrator, Lou, who is grieving the death of her first love, will be familiar to fans of Fiona’s first novel, Six Impossible Things, in which she had a minor role. Australian YA authors play this card so well – Jaclyn Moriarty and Melina Marchetta and now Fiona Wood. I can’t recommend Wildlife strongly enough – suffice to say that I missed not just one but two train stops while I was reading it.

I went to the packed-out launch of Nicole Hayes' debut YA novel, The Whole Of My World, last week. This book is such a labour of love – love of AFL as well as love of teen fiction, and it’s a brilliant blend of both, with the main character a die-hard supporter of a fictional team. Hold fire for a moment while I tell you that I really couldn’t care less about AFL, but I find the world surrounding the game very interesting and that’s what The Whole Of My World is really about. This is a clever and very appealing story. If you can’t take the word of a non-believer, read this review by one of our AFL-loving booksellers.

Fans of Chris Morphew’s series The Phoenix Files will be thrilled to see that Doomsday is finally out. This is book 6. And those who loved Maile Meloy’s The Apothecary should check out The Apprentices. Kathy Kozlowski, children’s and YA specialist at the Carlton store, described it as “an utterly delicious read in so many ways”. Read her full review here.

Younger readers, I have not forgotten you! Here are three quick picks. Reaching Out: Messages of Hope has a Leunig illustration on the front and a list of superstar contributing authors as long as your arm: Andy Griffiths, Alison Lester, Graeme Base, Morris Gleitzman…it’s a who’s who, basically, organised by UNICEF young ambassador Mariah Kennedy. All author royalties go to UNICEF. Brilliant all round.

For brand new readers, one of the stories in Andy Griffiths' The Cat On The Mat Is Flat has been adapted into an early reader for those of us with kids in their first year of school who would love an easy, cheeky read to give their learning a fun boost. [The Cat, The Mat and the Baseball Bat](http://www.readings.com.au/products/16433406/the-cat-the-rat-and-the-baseball-bat)* can now be their first step into the work of one of Australia’s most popular children’s authors.

Browse through our other June highlights below. 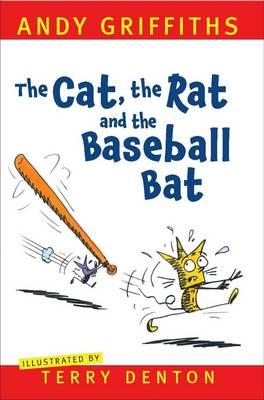 The Cat, the Rat and the Baseball Bat