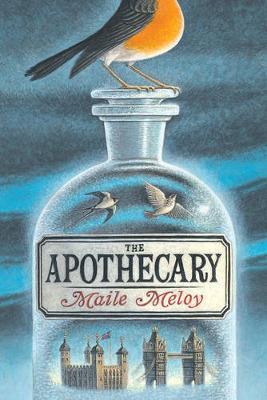 A mysterious apothecary. A magic book. A missing scientist. An impossible plan. It’s 1952 and the Scott family has moved unexpectedly from Los Angeles to London. Janie feels uncomfortable in her strange new school, until the local apothecary promises her a remedy for homesickness. But the real cure is meeting the apothecary’s son Benjamin, a curiously defiant boy who dreams of becoming a spy. Benjamin’s father is no ordinary apothecary, and when he’s kidnapped, Benjamin and Janie find themselves entrusted with his sacred book, the Pharmacopoeia. And it seems that Russian spies are intent on getting their hands on it. What secrets does the book contain? Who is the Chinese chemist Jin Lo? And can they trust a skinny pickpocket called Pip to help them? Discovering transformative elixirs they never imagined could exist, Janie and Benjamin embark on a dangerous quest to save the apothecary and prevent an impending nuclear disaster. The Apothecary sparkles with life and possibility. This is a story that will delight kids and return not-so-young readers to the magic of childhood.

Maile Meloy has two short-story collections and two adult novels under her belt. She’s been shortlisted for the Orange Prize and her fans include Ann Patchett, Philip Roth and Richard Ford. This, her first novel for younger readers, has all the wit and sophistication of her books for adults. A fantasy adventure firmly rooted in the real world, it’s set in 1950s Cold War London, and will hugely appeal to readers aged 12 and up.

Janie Scott is a tomboyish Californian 14-year-old who idolises Katherine Hepburn, wears trousers, and loves junior lifesaving, and eating oranges and avocadoes fresh from the tree. But when her parents, Hollywood screenwriters, are pursued for being Communists, they’re forced to move to grey, cold, London: land of bad food, worse heating and cramped lodgings. There, homesick Janie meets chess champ Benjamin, who yearns to be a spy, though his apothecary father wants him to follow in his footsteps. When Benjamin learns his father is no ordinary pharmacist, but makes magic medicines and is involved in a mission to thwart nuclear warfare, he and Janie are drawn into a fantastical plot and a series of thrilling adventures.

All the ingredients of a successful early teen adventure are here: (very chaste) romance, friendship, and a quest to assert control over their world largely in the absence of – or despite – the adults in their life. There’s a book of spells to be protected, a bomb to beware, and an unexpectedly dastardly villain to evade. It’s great fun – and smart to boot!

Jo Case is the editor of Readings Monthly and associate editor of Kill Your Darlings journal. You can follow her on Twiiter - @jocaseau.

END_OF_DOCUMENT_TOKEN_TO_BE_REPLACED

Look into My Eyes