It is an understatement in saying that Sarah J. Maas is an author you will never forget. My immense love for reading can always be linked back to when I discovered her in 2016. She immediately became my favourite author, and five years later she still holds that title.

Fair warning: Maas’s books will teach you the true meaning of love and friendship, whilst twisting and breaking your heart into a million pieces at the same time. That’s how her golden hair remains so shiny – she washes it with the tears of her readers.

A Court of Thorns and Roses (Young adult)

Although this is Maas’s second series, it is the one that introduced me to the absolute masterpiece of her writing. A Court of Thorns and Roses, or ACOTAR as it’s mostly known in the book fandom, is a seductive, dangerous reimagining of Beauty and the Beast – from page one of the first book to the very last page of the third book, you can never trust who is the beauty and who is the beast.

For murdering a faerie, Feyre Archeron strikes a deal with Tamlin, a powerful High Fae, to live in his lands, away from humans, for the survival of her family. There she learns of an ancient curse on the land and on her captor, whom she is starting to realize is not as beastly as she first thought. But love is a dangerous game in Prythian – it has the power to save the world or destroy it.

The ACOTAR trilogy (and the novella A Court of Frost and Starlight) follows Feyre’s journey. But this isn’t goodbye. Maas' spell-binding writing continues in A Court of Silver Flames, an equally magical novel on Feyre’s older sister Nesta Archeron, which was released in February 2021. More books in Prythian are yet to come, so please excuse my absence, I have to go to the supermarket to buy more tissues.

Throne of Glass was Maas’s debut in the world, and let me tell you, if she can create an iconic, unforgivably amazing character like Celaena Sardothien at the beginning of her career, then that gives a hint of how brilliant her writing, her characters and her worlds are. This bestselling series took the world by a storm, but Maas is not nearly done wreaking havoc.

Celaena has everything that makes the perfect assassin – she’s got the ass, she’s got the sass, and she’s got plenty of sin in her. In the salt mines of Endovier, where she is serving a life sentence, Celaena is offered a deal by the young Captain Westfall: her freedom in return for one huge sacrifice. Celaena must represent the prince in a to-the-death tournament - fighting the most gifted thieves and assassins in the land. Live or die, Celaena will be free. Win or lose, she is about to discover her true destiny.

House of Earth and Blood is Maas’s first adult book, which can only mean one thing: more passion, more danger, and more heartbreak.

The story follows half-Fae and half-human Bryce Quinlan as her perfect life of partying and dancing is turned upside down when she finds the murdered bodies of her closest friends, and is thrown into the heart of an investigation. She’ll do whatever she can to avenge their deaths, even if that means tolerating the stubborn, yet infuriatingly attractive Fallen angel, Hunt Athalar, as they delve deeper into Crescent City’s underbelly and uncover secrets that were never meant to be found.

With unforgettable characters, sizzling romance, and page-turning suspense, this richly inventive new fantasy series delves into the heartache of loss, the price of freedom, and the power of love.

When the Bat’s away, the Cat will play.

Reading this standalone novel, I began thinking I knew what to expect. The silent guardian of the night, dark alleyways replete with the most iconic, devious villains known to the world. How foolish I was to underestimate Sarah J. Maas.

With Batman off on a vital mission, Gotham City is ripe for the taking. Teaming up with Harley Quinn and Poison Ivy, the clever and conniving Selina Kyle is ready to wreak havoc. But with buried secrets threatening to be unleashed, unexpected love around the corner, and the danger of a bigger evil rising every day, even villains can have the most heroic of hearts.

It’s time to see how many lives this cat really has.

Aurelia Orr is a member of the 2021 Readings Teen Advisory Board. 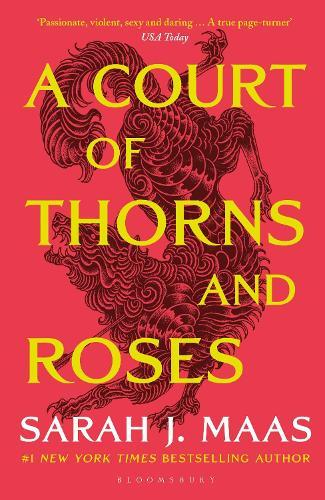 A Court of Mist and Fury

A Court of Wings and Ruin: The #1 bestselling series

A Court of Frost and Starlight: The #1 bestselling series

A Court Of Silver Flames

The Assassin’s Blade: The Throne of Glass Novellas