We See the Stars by Kate van Hooft

Simon is an 11-year-old boy living in a world of silence, lists and numbers. Rarely known to speak to his family or classmates, Simon uses his imagination to make sense of everything occurring around him. In her debut novel We See the Stars, Kate van Hooft writes with deep tenderness of the difficulties of being an outcast growing up as a young boy in 1970s rural Victoria, and of the frustration of being a child misunderstood by the adults and peers around you.

Struggling to connect with his classmates as his family life disintegrates, Simon finds companionship in his brother, Davey, the ‘weird’ girl from his class, Cassie, and his beloved teacher, Ms Hilcombe. Yet when Ms Hilcombe mysteriously disappears from town, Simon is adamant he is the only one who knows how to save her. Along the way, van Hooft crafts fairytale-like imagery of Simon’s internal struggles – the pains inside his body become birds in his chest, the honeycomb of swarming bees, or rising storm clouds.

As the novel reaches its conclusion, van Hooft increasingly moves into magic realism as Simon’s reality continues to slip away from him. Simon’s world was always illusory, wrapped up in his escapism with imaginary friends, Superman and travelling ghosts, and expressed most poignantly in the consistent return to the sublimity of the night sky and to the love he expresses for his mother:

‘Is that the Big Dipper?’ Mum asked. Her eyes were bright from the light in them, and they shone in the darkness more than any of the stars in the sky.’

We are left with a puzzling, open ending, and, ultimately, it is up to the reader to put together the pieces. This is a hauntingly beautiful, compelling and touching novel that keeps you guessing. 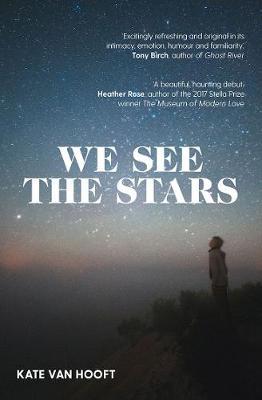 We See the Stars