This Is Gonna End in Tears by Liza Klaussmann

This Is Gonna End in Tears is a captivating story about the strength of friendship, trying to forget the past and what happens when the past comes rushing back to you. Reading this was like a psychedelic dream; it burst with colours and flavours so delicious I couldn’t help but absorb every word like honey.

Set in the 1980s American beachside town of Wonderland, with flashbacks to the 1950s, this novel roams through the livesof Miller, Olly and Ash, three inseparable childhood friends who cannot imagine a world where they are not joined at the hip. Flash forward 30 years and Ash and Miller are unhappily married to each other and have vowed never to speak of Olly again. Olly, in the meantime, is a director in Los Angeles, drowning his past with drugs and alcohol. When he is fired by the studio, he returns home seeking inspiration for what he guarantees will be his next big blockbuster: Moby Dick. When the three reunite, new secrets are revealed, love and loyalties are tested, and a sudden truce may have to be called when they realise Miller and Ash’s son may be in some serious trouble with the neighbour next door …

Like Captain Ahab monomaniacally pursuing the white whale, each character longs for something just beyond their reach. Miller refuses to take off her literal green-tinted glasses, aching for a world of joy and paradise so much that she forgets the real world isn’t a fantastical Emerald City. Ash wants to begin a new life with a beautiful TV presenter who does not feel as deeply for him. And Olly endlessly searches for a good enough reason to keep living.

Liza Klaussmann (a novelist and journalist who also happens to be the great-great-great-granddaughter of Herman Melville) has stitched together an enthralling world with dazzling characters who make you laugh, cry and reminisce over childhood memories. Welcome to Wonderland, where our darkest desires are revealed in the sunny, golden afternoons.

Aurelia Orr is a bookseller at Readings Kids. 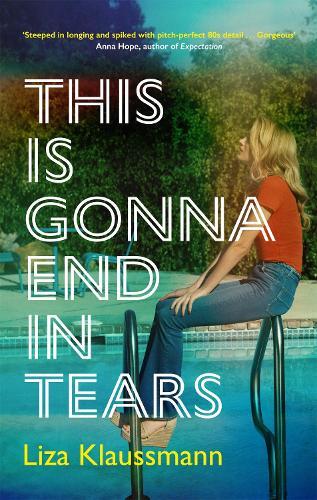 This is Gonna End in Tears