The Chase by Candice Fox

At a prison in Nevada, the annual friendly baseball game between the officers and the minimum-security inmates is due to take place. A bus load of family members is coming to cheer on the guards, as they have done every year for the past decade or so. Only this year, someone knows they’re coming. This year, someone is going to take advantage of that fact and hold the bus full of people hostage until the prison officers let every last inmate out of jail, all 650 of them.

As the prison inmates scatter across the country, the race is on to find out who the mastermind was behind the escape and what they plan to do next. In the meantime, death row inmate John Kradle is determined to use this unexpected opportunity to prove his innocence. However, the prison officer he has been goading for the past five years won’t let him get away that easily. That officer, Celine Osbourne, experienced horrific family violence when she was a teenager. Now she hates those accused of murdering their families more than anyone, and in her eyes, John Kradle shot his wife, his sister-in-law and his son. He deserves to rot in a cell until his own day of execution comes and there’s no way he is ever going to convince her otherwise. Except when Celine starts to investigate John’s past, nothing quite adds up.

Roll Prison Break, Con Air and The Fugitive into one, put them in a book, add some seriously kick-ass female characters, and you have The Chase. Highly addictive, constantly surprising and with enough suspense to keep you guessing page after page, it is impossible not to admire Candice Fox’s crime writing skills. By the end of this book, she will make sure you never trust anyone again.

Kate McIntosh is the shop manager at Readings Doncaster. 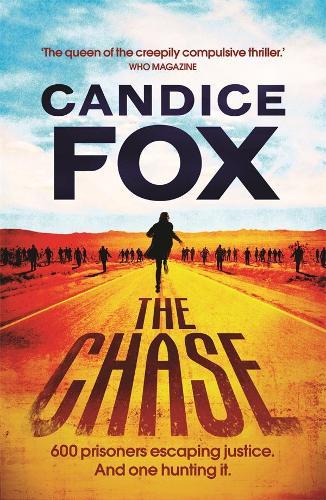