The 7th Function of Language by Laurent Binet

Paris, 1980. Detective Jacques Bayard is not familiar with the works of the influential literary critic and philosopher Roland Barthes when he enters his hospital room on a Monday afternoon. Barthes has just been hit by a passing truck on Rue des Ecoles, after dining with the socialist presidential candidate François Mitterand a few weeks before the election. Nothing appears out of the ordinary after Bayard’s initial investigation, but something doesn’t sit right with him: what if this were no accident? What if Barthes had in his possession a secret, fabled document of literary theory that was coveted by intellectuals across the globe: politicians and Communist governments alike? To guide Bayard through the labyrinth of what he sees as left-wing intellectual obscurantism, he must reluctantly enlist the aid of a young lecturer in Semiology, Simon Herzog. Together, they investigate clues, travel across Europe, and navigate the works of some of the towering figures of twentieth-century thought (Foucault, Kristeva, Deleuze, John Searle, Philippe Sollers), each leading them closer to a secret society of debating academics and the mystery of The 7th Function of Language.

Laurent Binet, has delivered an incredibly complex, hilarious philosophical-detective story set in an absurdist, alternate universe of French philosophy and literary history. Upon first glance, it might seem difficult, and at times an unusual departure from his debut work (where the process of history is investigated as it is written). Here, we’re inside a counterfactual history, but return to Binet’s familiar post-modernist tropes and self-consciousness. For instance, at one point Herzog (after listening to Derrida lecture) becomes increasingly paranoid, questioning whether he is nothing more than a character inside a poorly constructed novel.

Once the world of the story is revealed and understood, The 7th Function of Language is a wonderful assemblage of Joyce, Conan Doyle, and Umberto Eco (himself another character), and a must-read for those who are interested in the history of ideas, but refuse to take them too seriously.

Robert Frantzeskos works as a bookseller at Readings St Kilda. 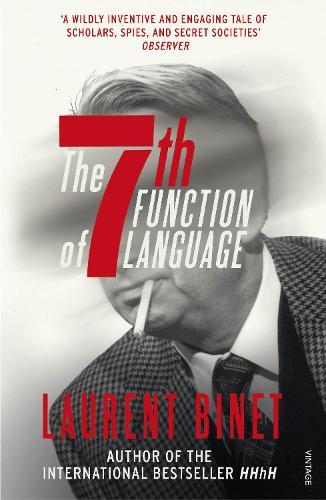