Travelling in a tinny through the Amazon jungle, Pavarotti makes a pilgrimage to a boarded-up opera house where Enrico Caruso supposedly performed. Once inside and onstage, he lets loose his inimitable tenor voice for the lucky few assembled in the auditorium. Via Ron Howard’s documentary, we gain rare access into the life of arguably the greatest operatic singer of the twentieth century.

Interwoven with such footage are interviews with daughters, ex-wives, bereaved wives, former lovers, colleagues and managers. Insights from Pavarotti’s daughters are perhaps the most intriguing, as much for what they leave out as for what they say. They are affected by his death, in awe of his legacy, and bewildered by unsavoury realities of his life. His multiple infidelities clearly weighed on them – something that is largely brushed over. In fact, much is brushed over in this documentary – Pavarotti’s womanising, the effect of it on his family, his financial troubles, and discussion of the mechanics of his impressive voice. Many of the interviewees speak overwhelmingly positively of a man who, although evidently lovely, was obviously sensitive, tempestuous, and at times unpredictable. Their occasionally troubled expressions belie their positivity.

That aside, I loved this documentary because I love Pavarotti. I love the freedom of his voice – the way he can release a note and let it unendingly resound without running out of breath, or without any hint of muscular interference. And we do hear a lot of his voice, from his early operatic recordings to his later commercial ones, and many, many excerpts of ‘Nessun dorma’ – an aria synonymous with his name. I would have loved to hear complete recordings rather than snippets, but that is really an unfair criticism considering it is a documentary and not a music video. A film not to be missed by fans! 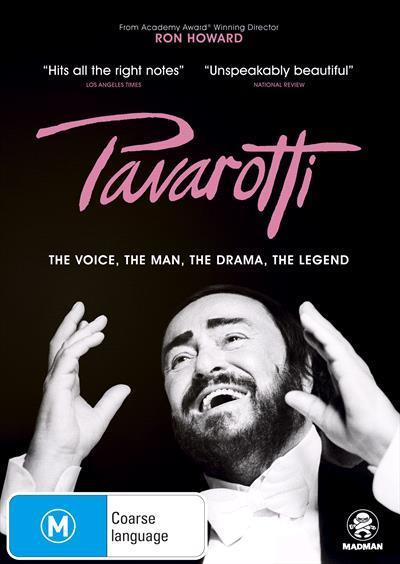