Inga Simpson is one to surprise. Her first novel, Mr Wigg – while not something I would instinctively select – quickly won me over with its heartwarming tale. Her second work of fiction, Nest, again deals with loss, grief and healing, and the role that nature and creativity play here easily drew me in.

Jen has moved back to the quiet coastal hamlet of her childhood and spent many years tending to her semi-isolated forest home, creating a safe haven for her and the birds she lovingly draws. She has minimal contact with the gossiping townsfolk, instead getting updates from her talented drawing student Henry.

Jen’s peaceful existence is shattered one day when a local schoolgirl in Henry’s class goes missing, mirroring events that took place when Jen was Henry’s age: her own best friend, Michael, disappeared, followed by her father a few days later. Jen finds herself revisiting memories she thought she had locked away. Having exhausted attempts to locate her father years ago, she is again questioning his reasons for leaving and grappling with the possibility that he is still alive.

I found that Simpson’s use of botanic and biological names added nicely to Jen’s complete absorption in her environment, and, as in Mr Wigg, the inclusion of the day-to-day maintenance of her house and tending of the land across the seasons adjusted me into her rhythm. Where I struggled a little was when Jen slipped back into memories of her past relationships and decisions: though this was not unexpected given the situation, I became irritated by her brooding. On reflection, I can see that these flaws make Jen human, and I forgave her moments of self-pity for the overall strength of character that Simpson carves out for her. Nest is a delightful and uplifting read. 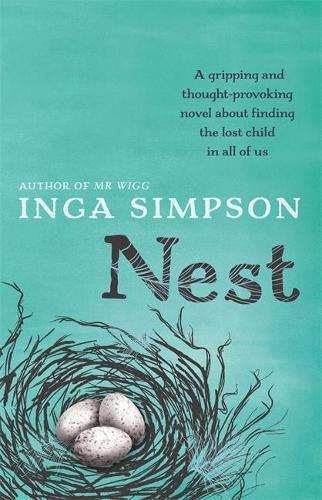