Lizard is a street-smart twelve-year-old who lives in tiny quarters above a tailor’s shop in Singapore’s Chinatown, and ekes out a bare living with legitimate odd jobs, and a few slightly shady ones for minor gangster Boss Man Beng. The year is 1940 and the atmosphere in the British colony of Singapore is tense. Rumours of Japanese espionage abound, but when Lizard is asked by Beng to steal a small wooden box from a Raffles Hotel suite, he has no idea that he’s about to get sucked into a dangerous vortex of organised crime and secret intelligence organisations. Privileged and somewhat-terrifying Georgina Jane Whitford Jones catches Lizard in the act and inserts herself into the intrigue, and it’s not long before Lizard’s friends Roshan, a Raffles waiter, and Lili, the tailor’s daughter, are involved too.

The heady tropical environment and cultural melting pot of Singapore is brought vividly to life in this thrilling historical adventure, and the political and social complexities of wartime Singapore are handled with clarity and care for a young audience. Lizard, Georgina, Roshan and Lili make a delightful team that spans class and culture; and their impressive sleuthing and spying efforts are laced with high stakes, thrilling escapes and good humour. For ages 9+. 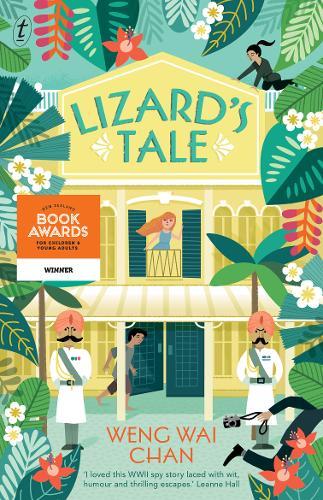