An extraordinary performance by Lenny Bartulin, this thrilling historical novel jumps, skitters and clatters across the page under your eyes. A vaudevillian juggling act of entertainment, history and intrigue, the story is as much declaimed as written. The action begins in Berlin in 1806 as Napoleon, munching on liquorice, arrives in triumph at the head of the victorious French army. We quickly zero in on luckless poet Johannes Meyer who gets dragooned into the army, and whose fortunes we breathlessly follow throughout this rollicking tale. The surrounding cast of sharply drawn characters are introduced via the compelling structure of the book, which introduces every new scene, each of a couple of pages or so, with a new title. The effect is of silent movie intertitle cards combined with modern cinematic jump-cutting. Each scene sets up a new mystery, danger or dalliance and ends in a cliffhanger so that another character’s story can be updated. Keeping these parallel stories up in the air, and wondering where the next dextrous plot turn will take us, makes this an exciting narrative to assemble, even as we’re enjoying Bartulin’s pungent and poetic language.

From Berlin to South America to Hobart to the slaughter of the First World War, Fortune leads us on a merry dance, with a sardonic, joyful narrator calling the tunes. This book reads like a carnival, and Bartulin has a strong sense of the physicality of the lives of his characters. They suffer the crudity of violence. They have some great sex. The voice of the ringmaster narrator rings out over their outrageous fortunes and gives shape to their unruly lives. This is an exciting book, excitingly written and daringly executed, stuffed with history, and adventure, and eventually, Tasmania. 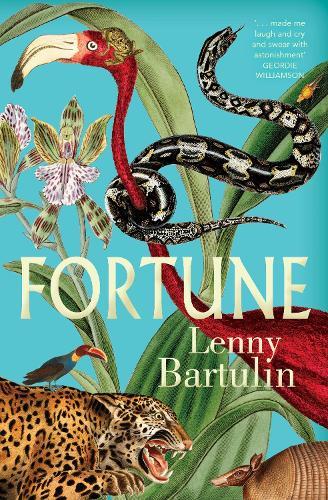