Now in their mid-thirties, Cate and Hannah, friends since high school, are drifting apart. Oxford-educated Cate is a new mum who has relocated to Canterbury in a house purchased by her in-laws. She’s worried that the life she’s living is no longer her own. Beautiful Hannah seems to have it all – a cool London apartment, a meaningful career, an adoring husband. But she’s desperate for a baby and embarks on another punishing round of IVF. Meanwhile, their friend Lissa barely makes ends meet as a frequently out-of-work actor, longs for a man she can’t have, and thinks she’s a failure. Each woman wants a bit of what the other has got.

With this incisive and brutally honest novel, Anna Hope asks what it feels like when the expectations you had for your life as a younger person don’t materialise? She answers that question by shifting deftly between Cate, Hannah, and Lissa’s perspectives, and back and forth between the constraints of the present day (the novel is set mostly around 2010) and a more fearless, less compromised past. A repeated idyllic flashback to when the women shared a house on the edge of London Fields has the faded beauty of a Polaroid, imagined as a time when the world and its possibilities spreads out long and wide like an endless summer afternoon.

Expectation’s evocation of place, time, and the different stages of women’s lives, is vivid and true. I loved how weirdly similarthe women’s conversations at university in 1995 – about books, films, music, sex, and politics – are to those I was having then; how their uncertainties and desires are similar to those of many women I know now. We live in a complicated era that frequently asks us to conceal our confusion, disappointment, and pain behind a glossy mask of composure and success. With Expectation, Hope removes the mask. She finds beauty in the chaos too, in this elegant, empathetic novel about messy, ordinary, brave women who aren’t trying to change the world, but just do their best to live happily in it. 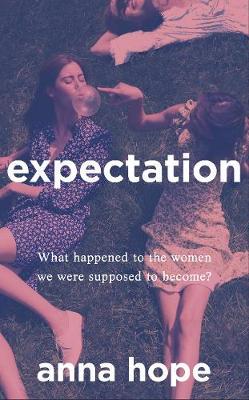