Confessions of a People-Smuggler by Dawood Amiri

I felt humbled to read Dawood Amiri’s Confessions of a People-Smuggler. He puts a human face to the people who end up in the messy middle to bottom end of the people-smuggling chain. It was less like I was reading Amiri’s story, and more like we were sitting in someone’s home, listening to him relay his life thus far. Although the language is simple, the narrative is intimate. While this book tells Amiri’s unique tale, it could also represent the experience of many people whose lives are lived in a mixture of fear, hope, duty, desperation and survival while they’re trying to get from one place of violence and persecution to a safer place, and the struggles they face in doing so.

Amiri, an ethnic Hazara, travels to Indonesia with the hopes of boarding a boat bound for Australia and seeking asylum. He has been chosen by his family to make this journey, as he is skilled and capable of earning some income. On reaching Indonesia he does odd jobs to earn the money to afford the boat fare; however, as he’s boarding the boat bound for Christmas Island, he is caught and placed in detention. While the legal asylum processing begins, time lags and little is accomplished.

Later, back outside, Amiri starts to work for the people-smugglers to earn enough for his own passage to Australia. Compounded with this is Amiri’s own experience of the slow legal process, which allow him to understand why asylum seekers might choose to take the risk of boat passage. Tragedy strikes when a boat sinks and he is the only remaining link in the operation. Amari is racked with guilt at the lives lost – which include two of his friends – and also at the prospect of facing jail when he is about to start his own family, and the story follows the legal and personal struggles Amiri faces.

What I took away most from this book is the selflessness in Amiri’s story. Regardless of how difficult or hopeless his situation has become, he thinks of his family, or other asylum seekers who are depending on him, and ultimately accepts his own fate. 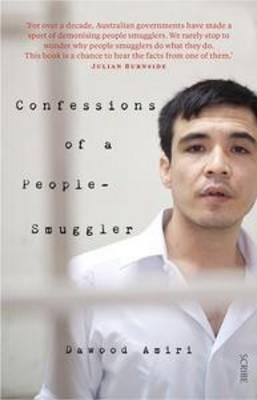