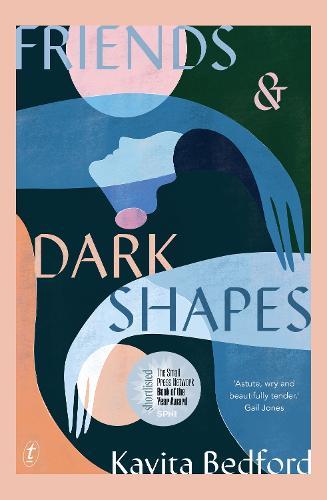 ‘The city I grew up in was elastic and belonged to me and my friends as we stretched it through the nights. We knew its contours, and when something new arrived we were among the first to be a part of it. Everything was powder pink and bendy and shiny for us. We hadn’t had time to build a lasting memory around some fixture and then watch that time fall away from under us.’
A group of friends moves into a share house in Redfern. They are all on the cusp of thirty and big life changes, navigating insecure employment and housing, second-generation identity, online dating and social alienation-and one of them, our narrator, has just lost her father.
How do you inhabit a space where the landscape is shifting around you, when your sense of self is unravelling? What meaning does time have in the midst of grief?
Through emotionally rich vignettes, tinged with humour, Friends & Dark Shapes sketches the contours of contemporary life. It is a novel of love and loss, of constancy and change. Most of all, it is about looking for connection in an estranged world.

In Kavita Bedford’s quietly hypnotic debut, an unnamed narrator in her late 20s roams the suburbs of Sydney trying to process her grief. A freelance writer, she lives in a Redfern share house with three other people fast approaching their 30s: lawyer Sami, aspiring musician Bowerbird and hardworking Niki, who juggles multiple jobs and side hustles. The quartet are facing a raft of existential issues characteristic of this new generation of adults: the precarity of work, the seeming impossibility of home ownership, the search for a meaningful life. ‘I don’t even know what I’m working towards anymore,’ says Niki during an outburst at a gallery opening the housemates have gatecrashed for the free wine. ‘Do we just keep on, heads down, making ourselves so tired to get somewhere like this?’

Our narrator is also beset by the undertow of her grief after her father’s death. She boards trains that crisscross the city, taking her from one suburb to the next. In some, she talks to the locals about their stories – a young hijab fashion designer setting up her own shop, a shoe repairer from Lebanon who recounts the changing demographics of his area. Other suburbs evoke memories of the narrator’s own past, like loving childhood outings with her father and her loud and wild teenage years. Each one of these vignette-like chapters inscribes personal histories and identities into the geography of the city.

That strong symbiotic relationship between self and place is one of the highlights of this dreamy and delicate novel. Bedford’s Sydney is restless, thronging with the sharp opinions and outspoken voices of its various inhabitants, allowing Bedford to flex her skilful way with voice and dialogue. At one point, the narrator muses that Sydney is a city without a centre: ‘There is no architectural organisation around a central point and the city lacks coherence.’ The same could easily be said of our narrator’s own interior landscape. In losing her father, the narrator is unmoored, and as she searches through the dark shapes of her thoughts and memories, she is attempting to form something solid again from the messy, fractured contradictions of her life.

With its slow build of emotion, sparse yet precise prose, and astute insights into modern-day adulthood, Friends and Dark Shapes is a thrilling debut for fans of Victoria Hannan’s Kokomo and Jennifer Down’s Our Magic Hour. It will imprint its shape onto your brain, leaving you thinking long after the final page.

Jackie Tang is the editor of the Readings Monthly.