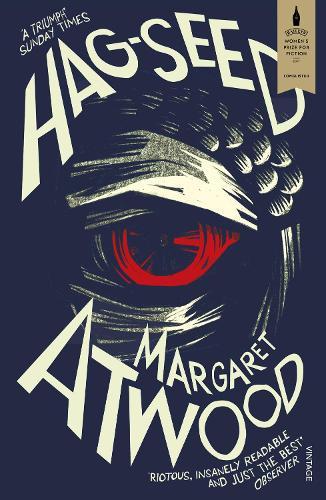 William Shakespeare’s The Tempest retold as Hag-Seed.
Felix is at the top of his game as Artistic Director of the Makeshiweg Theatre Festival. His productions have amazed and confounded. Now he’s staging a Tempest like no other: not only will it boost his reputation, it will heal emotional wounds.
Or that was the plan. Instead, after an act of unforeseen treachery, Felix is living in exile in a backwoods hovel, haunted by memories of his beloved lost daughter, Miranda. And also brewing revenge.
After twelve years, revenge finally arrives in the shape of a theatre course at a nearby prison. Here, Felix and his inmate actors will put on his Tempest and snare the traitors who destroyed him. It’s magic! But will it remake Felix as his enemies fall?
Margaret Atwood’s novel take on Shakespeare’s play of enchantment, retribution, and second chances leads us on an interactive, illusion-ridden journey filled with new surprises and wonders of its own.

Margaret Atwood’s Hag-Seed, the fourth novel in the Hogarth Shakespeare series, is a contemporary retelling of Shakespeare’s The Tempest, his late-career tale of magic and illusion. In Atwood’s version the plot takes place in a correctional facility (the Fletcher County Correctional Institute) somewhere in Ontario. In Hag-Seed, Shakespeare’s play is staged by ‘The Fletcher Correctional Players’, made up of medium-security inmates taking part in the ‘Literacy Through Literature high school level program’ at the facility, under the direction of Felix Phillips, former Artistic Director of the Makeshiweg Festival.

Felix – unceremoniously ousted from his previous position years before by poxy, poisonous usurpers – seeks revenge on said usurpers, and seeks to regain his title. Having disappeared into private exile, he stalks the ‘malignant, bawling, blasphemous, incharitable dogs’ – those poxy usurpers – on the internet as they rise through the ranks of government even as he is planning his revenge. In the meantime, the story’s only ‘true’ relationship is revealed: that between Felix and the daughter he lost at a young age. This beautiful, magical relationship at the heart of this story is only an illusion: his Miranda is gone, but he imagines her there, he talks to her, he comes home to find her there, he misses her when she doesn’t appear. Illusion and magic infuse this story, and Felix’s life; as a theatre director, he uses all the tools of illusion and deception at his fingertips to take his revenge.

Atwood uses cleverness and cheek to tell this tale of revenge, insanity, and grief. The play-within-the-play-within-the-novel is playful and perfect and suits Shakespeare’s Tempest to a ‘T’. Felix uses the magic of Prospero’s books and Shakespeare’s words to bring about his revenge, achieving unexpected redemption into the bargain. The evocative and haunting father–daughter relationship at the heart of the novel depicts a deep humanity in what is an almost-too-clever, tongue-in-cheek book. But – as always with Atwood – what cleverness, what tongue, what cheek!

Shylock Is My Name: William Shakespeare’s The Merchant of Venice Retold: A Novel

The Gap of Time