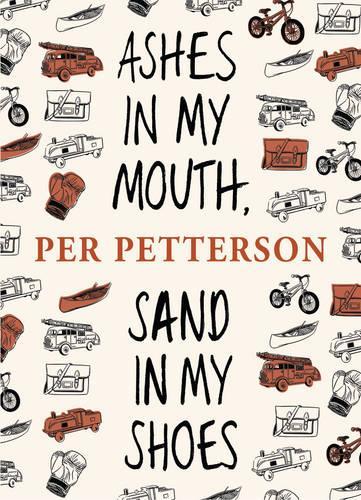 Arvid Jansen is a young boy who lives on the outskirts of Oslo. It’s the early sixties, his father works in a shoe factory and his Danish mother works as a cleaner. Arvid wets his bed at night and has nightmares about crocodiles, but slowly he is beginning to piece the world together.
Per Petterson’s debut, in which he introduces Arvid Jansen to the world, is a delicate portrait of childhood in all its complexity, its wonders and confusions that will delight fans of Out Stealing Horses and new readers alike.

Norwegian novelist Per Petterson writes beautifully – his prose slicing across the page in swift, clean strokes – and now English readers can take pleasure in his literary debut. First published in 1987, Ashes in My Mouth, Sand in My Shoes is a collection of short stories about a young boy who dreams of crocodiles. While Petterson fans might recognise the child as Arvid Jansen, from his novel I Curse the River of Time, you don’t need any prior knowledge of Petterson’s work to enjoy this newly translated title.

I love reading debuts; there is something distinctive in those early publications, an aspect – be it a thematic element, stylistic tic, or a particular motif – that is not quite right, yet somehow still utterly captivating. In later works this aspect might disappear entirely as the author grows into a new phase, or even better, improve with age. But for me this flawed potential is what holds a powerful sway over my imagination.

In Petterson’s case this aspect is his exploration of masculinity. In Ashes in My Mouth he attributes a certain kind of nostalgia to the male ideal of the strong, silent and isolated. This nostalgia is also weighted with unease as the young Arvid tries to make sense of his world. There are moments where Petterson falters – I found the comparison between Arvid’s father and the man they call Fatso blunt – but there are also moments of pure delight, such as in the titular story.

In this story Arvid had become paralysed by nightmarish visions and his father wills him back to the world through an exquisitely tender passage. As the father gently washes and dries Arvid, the power he exudes to his son is restrained but not muted – rather, his strength seems more palpable here than when he is in the midst of action. Throughout this scene Petterson lulls us into the same dream-like state of passivity that has overcome Arvid and then swiftly snaps us awake: ‘“Come on, let’s eat,” Dad says, and all of a sudden there is the wonderful strong aroma of fried bacon.’

Like for Arvid, this familiar smell clears away the fog; it is a simple but richly evocative return.