The winner of the first ever Readings Children’s Book Prize is… Tasmanian author Julie Hunt with her fantasy adventure Song For A Scarlet Runner!

Julie receives prize money of $4,000 and will be appearing at an event in July. In the meantime, she answers questions about her book, which the Readings' judges loved unanimously.

Tell us about your writing career so far.

I’ve been writing for a long time but Song for a Scarlet Runner is my first novel. I began by writing poetry and picture books and for a while I was getting one picture book published each decade which makes me sound ancient, but now things have speeded up. My lucky break was getting a book accepted by Allen and Unwin and the creative partnership that ensued from that. I can’t thank my editor, Sue Flockhart, enough for her part in the creation of Song for a Scarlet Runner. I used to think editors fixed the grammar and spelling but now realise they allow the story to evolve and with it, the writer. I was also lucky when Ron Brooks agreed to illustrate The Coat which won the CBCA award last year.

The judges all found Song For A Scarlet Runner to be layered and unpredictable. What was the first seed for this story?

Song for a Scarlet Runner was partly inspired by a trip to Ireland, to Cape Clear Island in the south west where I attended a storytelling festival. It was wonderful to hear traditional stories in that setting – standing stones, holy wells, big seas and the winds blasting in from the Atlantic. I like travelling, going to places that are full of stories.

The story started with the term ‘marsh auntie’. I’m not sure how or why those two words occurred to me – I might have misheard something on the radio – but they arrived one morning and brought a character and a world with them. I decided the marsh auntie would be a storyteller and herbalist and she would live in the swamp with a community of aunties and each would have a special skill.

Shortly after that, another mysterious pair of words appeared – ‘blame child’. I asked myself what a blame child would be like and decided she’d be born into a limited and difficult life, a life from which she’d have to escape. I called her Peat and that sent me to Ireland, literally, and in my reading.

If the judges found the story unpredictable it could be because I didn’t have much idea about where I was going as I wrote it. I had a runaway child who was lost in the marshes and a treacherous old woman who had rescued her for an obscure purpose which I hoped would become clear at some stage of the journey.

Your world-building was so rich and visual. What inspired you in this respect?

It’s probably a combination of landscape and language. The marshes were fertile ground for invention with their swirling mists and currents, their floating islands and the stilt huts and reed boats of the aunties. I had a lovely time making up the names of the herbs Eadie uses – healbane, swampbalm, hushweed, glibwort etc – and the names of the perfumes that her sister, Lily, creates – Swoon, Swirl, Limelight. They could be brand names of magical products.

Place names were also important, both within the marshes and beyond – The Churn, the Far Reaches, Hub, Skerrick and the Overhang. Once I had the name and the feeling I could shore up the environment with practical details. I tried to range widely then anchor the imagined world in everyday reality.

We loved Peat’s strength and vulnerability, the fickle sleek, eccentric Marsh Auntie Eadie and the unique language of 900-year-old Siltboy. Tell us about how you developed these four characters in particular.

I wanted Peat to be likeable and believable so I made her resourceful, competent and brave. The less positive sides of her nature are carried by the sleek who is, perhaps, her alter ego. The sleek is capricious; he can be vicious one moment and helpful the next. He’s a creature who travels between worlds and defies expectations. In a way, he’s pure potential and he’s the character many readers love best.

Eadie’s a bit like some of my own aunties, or my memory of them from when I was small. They were enormous women with big bosoms and buck teeth. They chain-smoked and bet on the horses and they were powerful characters. Unlike Eadie, they were smart dressers. Eadie wears a great shaggy coat covered in bird muck and slicked down with animal fat. That coat helped me define her character. It’s almost alive – things grow in it and it’s covered with pockets full of herbal cures.

Siltboy was a dream character to write. Part ancient warrior, part feral child, he speaks in an archaic tongue and this came straight from the Anglo-Saxon world, from riddles and from poems like ‘The Seafarer’. I tried not to copy actual words and phrases but to let Siltboy come up with his own original speech and this was difficult to sustain but I think he succeeded in the end. Siltboy is full of lofty ideals and he speaks straight from the heart. There’s a sweetness to him that’s very appealing and his song is the title of the book.

Even those of us who don’t read very much fantasy fell in love with this story. Could you share your favourite fantasy books or other inspirations?

I’m not a big fantasy reader but I enjoy Ursula Le Guin and Russell Hoban – in fact, I think Riddley Walker is my all time favourite book. I also enjoy John Berger, Louise Erdrich, Leon Garfield and Meg Rosoff and I read a lot of picture books, myths and legends.

One of the central ideas in Song for a Scarlet Runner came from reading folktales. It’s the concept of the ‘external soul’ and it goes a bit like this: a person takes their spirit from their body and hides it away for safekeeping so they can never be killed; they seem to be eternal until a brave hero comes along and outwits them, finding the hiding place and forcing them to obey the laws of nature. In this case, the hero is Peat. She goes on a dangerous journey and faces many trials and all the time she has no idea about the nature of her quest.

Where do you live and what do you do when you’re not writing?

I have worked in publishing for some time, on the production side of things. I used to work for CSIRO, typesetting scientific journals, and now I work as a graphic designer. I live on a farm in southern Tasmania in a mudbrick house that I helped build. It’s an organic farm and one of the things I enjoy is making compost. It’s a bit like writing – everything goes into the heap – but unlike writing, you know the heap is always going to work. Writing can be a difficult and uncertain business so getting an award like Readings Children’s Book Prize is most encouraging. It spurs me on to the next project.

Finally, Julie, we’d love to know what further novels are in the works.

I have two books in the pipeline. The first is a graphic novel called KidGlovz which I am doing with artist Dale Newman. Dale created the beautiful cover illustration for Song for a Scarlet Runner. This book is about a child prodigy, a pianist whose musical gift can best be described as ‘otherworldly’. He wears a pair of white gloves and when he discovers the gloves have a sinister past he begins to realise that his talent is a curse as well as a gift.

KidGlovz will be published next year and I’m writing a sequel which will be a hybrid novel – part graphic novel, part prose. The second story follows the gloves in their next incarnation. They change hands and turn a light-fingered boy, a pickpocket, into a thief who can steal anything – hearts, minds and souls.

Julie Hunt will be appearing in conversation with special guest judge Sally Rippin on Thursday 24th July 4pm at Readings Hawthorn. This is a free event. 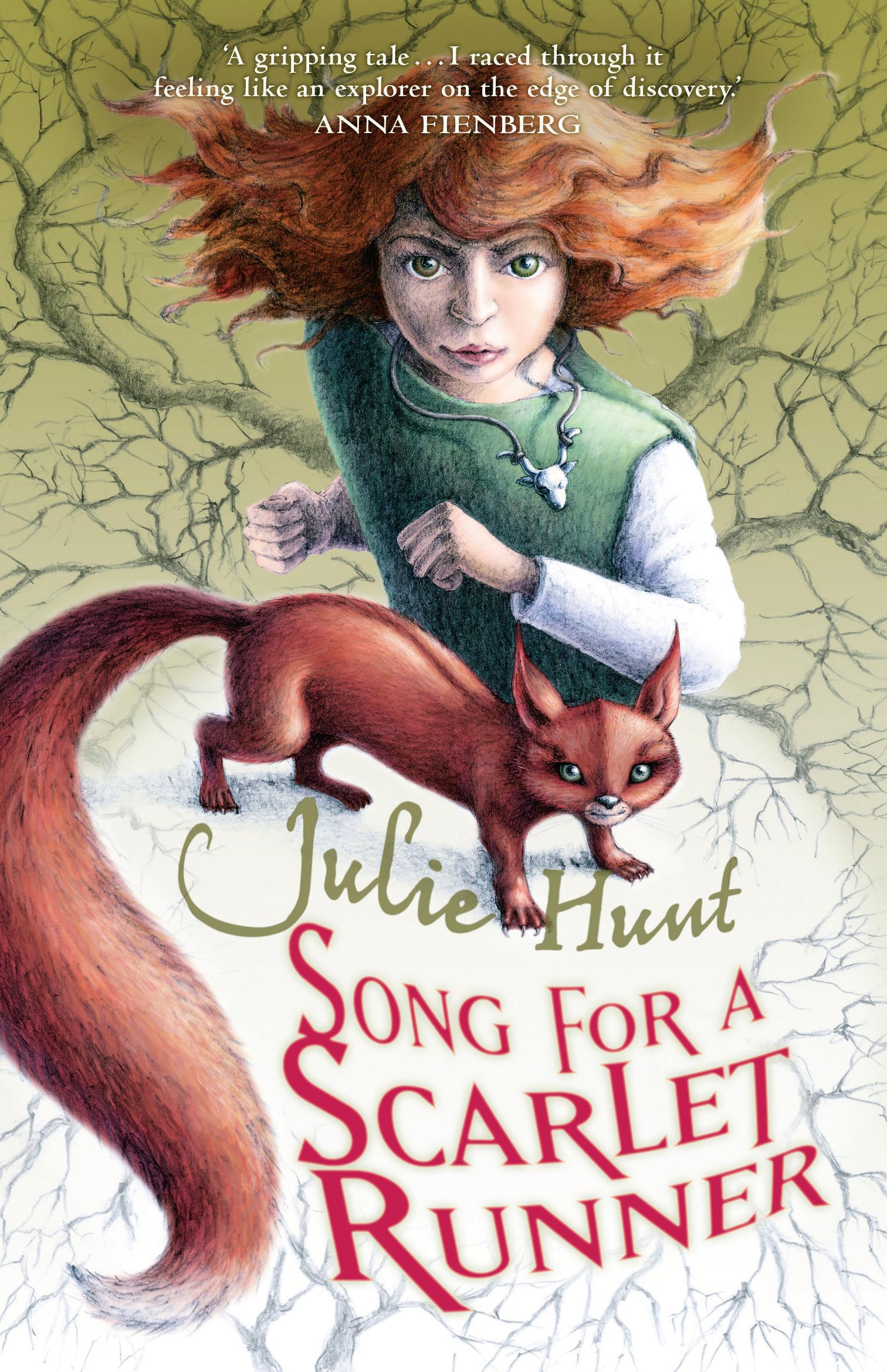