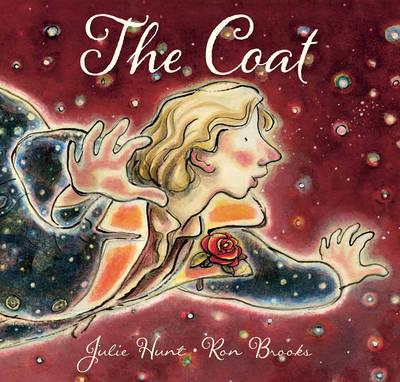 Winner of the 2013 CBCA Award for Picture Books

Illustrated by Australia’s leading picture-book artist, this is a surprising and delicious story that will lift you off your feet and whirl you away. A coat in a strawberry patch flies off with a down-at-heel man, and together they have the night of their lives.

The Coat stood in a paddock at the end of a row of strawberries. It was buttoned up tight and stuffed full of straw and it was angry. ‘What a waste of me!’ it yelled. Then along came a man. ‘I could do with a coat like that,’ the man said. Together, swooping and swinging, they travelled to the Cafe Delitzia, and had the night of their lives.

A bold and original picture book.

Julie Hunt is a gifted writer, author of the Little Else books and Precious Little (with Sue Moss, illustrated by Gaye Chapman). She lives in southern Tasmania.

Ron Brooks has won many awards, including the CBCA Picture Book of the Year Award three times, and is published in many countries around the world. Two of his early books, The Bunyip of Berkeley’s Creek and John Brown, Rose and the Midnight Cat, both written by Jenny Wagner, are widely recognised as introducing Australian picture books onto the world scene. Two of his more recent titles are Old Pig and Fox, both written by Margaret Wild. Fox has won many Australian and overseas awards. In 2010 Ron published a memoir, Drawn from the Heart, and in 2011 a new picture book by Margaret Wild, The Dream of the Thylacine. He lives in Huonville, Tasmania.

A splendid coat feels itself wasted on a scarecrow till a rather diffident young man comes along and tries it on. Then suddenly the world is theirs and they soar across the landscape to the Cafe Delizia where they are invited in, not just as guests but as performers. To the young man’s consternation. But together they do entertain, they shine in fact, and bring the whole crowd to its feet in joyous dancing.

It is miraculous and life affirming and totally mysterious and Ron Brooks’s fluid illustrations say it all. I am not sure what the book is about. Homage to one’s muse? An allegory? Who knows? But from the wonderful endpapers to the evocative use of colour, the book is alive and full of mystery. Which is enough. A picture book for all ages.

The Bunyip of Berkeley’s Creek

More books by the RCBP2014 shortlist