The Woman in Black

I am often asked which of Madeleine St John’s novels is ‘the best’ to begin with. Which one would I recommend to a reader unfamiliar with her work? As her biographer, I confess that I can’t get enough of this underrated writer. Indeed, one of my minor sorrows in life is that there are only four novels – and a fifth unpublished draft I have been lucky enough to read. How I wish there were more manuscripts to discover. But just as lovers of Richard Yates have to settle for a limited body of work, so too must those of us who rate St John highly be content with reading and re-reading her relatively tiny output – The Women in Black (1993), A Pure Clear Light (1996), The Essence of the Thing (1997) and A Stairway to Paradise (1999).

So, which one would I recommend to begin with?

It’s probably unpatriotic to admit, but I’m a bigger fan of her three ‘London novels’ than of her single work set in Australia, The Women in Black. This work, based in a fictional department store called Goode’s in post-war Sydney, is possibly St John’s most popular book and certainly her biggest seller in Australia. Its poised mix of nostalgia, social commentary and wry humour resonates with local readers. St John wrote the book from a distance, in 1991, just as she was about to turn 50. She had lived in London for three decades and had made only two brief trips home to Australia in that time – in 1976 and 1980. The time away had given her perspective and allowed her to contemplate her home country with a degree of affection. The Women in Black is a perfect little novel. But St John’s expat life meant that she had only one Australian book in her – one set in the past, in a world she recalled from her childhood and teenage years.

With Australia ‘off her chest’, so to speak, she turned to the city she knew intimately as an adult and began to write her contemporary stories of love, loss and the search for a moral compass in a secular, materialistic world. St John had lived in inner London – around the Portobello Road in Ladbroke Grove and Notting Hill – for 30 years. She had watched it gentrify and change during the thrusting Thatcher years, and she understood the patois and the habits of the natives as well as she had the lives of Sydneysiders of the 1950s.

St John had a brilliant ear and a sharp eye. She was a supreme observer with a talent for reporting the tiny incidents or phrases that reveal character and plot. All those qualities are present in my first choice – her 1996 work, A Pure Clear Light. This was the first novel by St John that I read, prompted by Peter Craven’s review in The Weekend Australian when Text Publishing released an edition in late 2010. Craven called it ‘a book about the search for truth’, but it was his praise of St John’s elegant, individual writing that pushed me to order a copy. I was not disappointed. From the opening page, St John’s assured dialogue and feel for the nuances of relationships pull the reader inside the closed world of Simon and his lover Gillian Selkirk:

‘Simon, there’s a woman over there who keeps looking at us.’ ‘Surely not.’ ‘There is. For God’s sake; take a look yourself. It must be someone you know.’ ‘Hardly likely, darling. Just your imagination.’ ‘I haven’t got any imagination, as you perfectly well know. Look, there she goes again. Hurried, furtive glances. Oh my God.’

This is a story about infidelity and lust and the unsettling impact of desire upon settled domesticity.

Simon is ‘too busy to go in for extra-marital love affairs, even if he’d believed them to be permissible’. He concedes that ‘Flora might be looking a bit seedy, as was to be expected after three children and so on, but he loved her, whatever that might mean …’ But his comfortable sense of his own moral fibre is undone by Gillian, with a voice ‘the colour of mahogany’. Soon he is deep into deception. Flora, meanwhile, pursues her own love affair, with the Church of England. She finds herself talking to the Virgin Mary in the kitchen as she prepares the evening meal, and she alarms her husband with her decision to go to Sunday Communion.

In 1993, writing to a friend, St John suggested that this book was ‘politically incorrect’. Certainly, it is deeply unfashionable to take institutional religion and God seriously in a novel, especially a novel with sex at its core. That’s St John’s triumph – to deliver us a ‘relationship novel’ that explores profound ideas about loss, desire and faith. Almost all of it is in dialogue – spare, clever, apposite phrases that show the author at her most perceptive and direct. The Irish Times described the novel at the time: ‘As light, true and exact as the finger gliding down a lover’s back.’

St John was shortlisted for the Booker Prize in 1997 for her third novel, The Essence of the Thing, but missed out to The God of Small Things by Arundhati Roy. For my money, she should have been nominated a year earlier for A Pure Clear Light. I reckon she would have beaten Graham Swift and his Last Orders, hands down.

Helen Trinca is the author of Madeleine: A Life Of Madeleine St John. She has held senior reporting and editing roles in Australian journalism, including a stint as The Australian’s London correspondent. She is currently managing editor of The Australian. 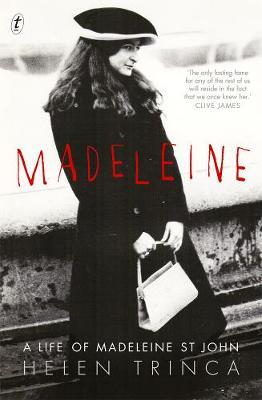 END_OF_DOCUMENT_TOKEN_TO_BE_REPLACED

The Women in Black: Text Classics

Written by a superb novelist of contemporary manners, this is a fairytale which illuminates the extraordinariness of ordinary lives.

A Stairway to Paradise

Alex and Andrew are friends. And Barbara... Barbara is a goddess. Here is the eternal triangle, the story of three people locked in an unhappy tangle of emotions, none able to articulate the precise quality of their longing and...

Sydney in the 1950s. On the second floor of the famous F.G. Goode department store, in Ladies' Cocktail Frocks, the women in black are girding themselves for the Christmas rush. Madeleine St John conjures a vanished summer of...

The Women In Black

A fairytale which illuminates the extraordinariness of ordinary lives. With the lightest touch and the most tender of comic instincts, Madeleine St John conjures a vanished summer of innocence.