Grandmothers' Law Should Never Be Broken

This is an edited extract from Ali Cobby Eckermann’s essay of the same title in Grandmothers: Essays by 21st-Century Grandmothers edited by Helen Elliott.

In the night someone strung a line of crow carcasses across the fence outside her house. She discovers them as she leaves the house for work. Her breath catches in her chest and she cannot breathe. Jesus! she mutters, half in anger and half in a plea to the heavens. Who would do such a thing? Unable to move, her entire body is frozen with shock. She dares not look at the dull eyes on their avian faces, the heads hanging as if dangling on broken necks. Her hands rise, as if by free will to cover her mouth, to stifle the scream she feels growing inside her chest. It is inaudible. She vomits a mouthful of dark bile into her palms. The darkness acts like a mirror and she stares at the reflection she holds in her cupped hands. It is her grandmother’s face transforming to crow. In the backyard of the tenement house the young woman’s actions are frantic. Her hands are filthy now, covered with dirt from the large hole she has dug in the ground. She gathers twigs from under the hedge to add to a small fire she has lit next to the hole. She paces between as if undecided. She kneels to scoop more dirt into the grave, bends to gather more kindling for the fire. Squatting on her haunches, she rolls her head back to stare at the sky. It is cloudless, as empty as her shaking heart. Her head flops forward and she sobs into her hands. Through her tears she senses the arrival of her, and quickly wipes her tears in a muddy streak across her face. A willie wagtail hops across the dry lawn to her side. They crouch together, staring in silence into the fire.

Birds. The adventure of feeling an association with birds was taught to me by my familial grandmother, whom I first met when I was thirty-four, in the red desert of central Australia, at the small community where she was living. Nana was a petite woman filled with warm laughter, with an engaging smile and a shock of white hair. I was the second of her Stolen- Generation grandchildren to return home. Now in her senior years, she was respectfully retired from work and always made time to sit and talk, telling story after story, as if making up for those lost years. In the late afternoon we sat outside her house in the shade of the water tank while she sang the birds, feeding them titbits as they arrived. I watched, fascinated, as some flew onto her lap, chirping to her as if joining her laughter. A few years later, Nana moved to Coober Pedy. She was a founding member of Kupa Piti Kungka Tjuta, a heroic group of senior Aboriginal women who in 1998 headlined a challenge against the Australian government to prevent a nuclear waste dump on their traditional land, and won their case in 2004.

The Stuart Highway cuts through the centre of Australia from Darwin in the north, through Alice Springs, to Port Augusta in the south. It is one of Australia’s major highways and the opal-mining town of Coober Pedy rests on its rim. On warm sunny days I would sit on Nana’s verandah in the company of her dogs, listening to her childhood stories of growing up in the bush before the saga of the nuclear testing by the British on our traditional lands at Maralinga. If the weather was too hot or too cold, we camped on mattresses in her dimly lit lounge room, peering at faded black-and-white photographs of people who had passed. She kept this stash of photographs hidden in a handbag in her bedroom and brought them out to teach me our family tree. There was always laughter and the sharing of food. I loved every opportunity to care for her; it was a blessing prompted by cultural exchange. As Nana grew more frail, she moved into the local aged-care facility where most of the Kupa Piti Kungkas Tjuta spent their final years. Through the kinship system, I was proud to regard most of these cultural law women as my grandmothers. Those years with Nana before she died were among my happiest.

Many Aboriginal people know the willie wagtail bird as the messenger bird. This small black-and-white-feathered fantail is often known to bring news when loved ones have died. I saw it once relentlessly flying against a window- pane to gain attention, minutes before the phone call arrived, confirming a family member had died. I used to chase them away. My grandmother and her cousin-sisters would sing to them, inviting them to join us, laughing at my nervousness. I learned that these birds also bring good news, and are guardians. In Yankunytjatjara culture, all bird names are their call. The willie wagtail is tjintar-tjintar. The crow is kaanka. Both birds have become essential to my holistic health.

It is common sense that if one stays in one location for a long amount of time, one will learn to know that place in a more intimate way. My traditional family has lived on our traditional lands for over eighty thousand years. Anthropological science has proved that Aboriginal culture is the longest living continuous culture on this planet. A job opportunity in my early forties provided me with the chance to be closer to my traditional Anangu family and live with them in the desert. Within their ‘university’ of ancient knowledge I was their ‘mature-age student’, who had a voracious appetite to learn. Guidance from a select group of senior women and men was grounded and sage; I listened to their every word.

As they retired and moved into aged care, I returned to the south. At forty-five, I bought the old General Store in Koolunga, just south of Port Pirie in South Australia, establishing Australia’s first Aboriginal Writers Retreat. I replayed – over and over in my heart and mind – the ethics and memories of those poignant years learning from Nana and the other Elders. The vividness of recent memory began to override unpleasant memories of the racism I had endured during my youth as an adopted child. With my new knowledge, I could enjoy resting in bed, listening for the first bird call of the day. Often, I would gain energy and momentum from the bird calls that were most familiar to me. The knowledge of birds has become an ongoing ritual of focus for me. Familiar bird calls act as spiritual affirmations to my heart and reassurances that those I love are nearby: I am loved by nature, and I am not alone.

Since the death of Nana, and all the many other caring, wise, senior women who welcomed me back into my family, including my mother and her sisters, I have travelled extensively across Australia and overseas. Everywhere, my eyes are trained to watch for birds. Using cultural knowledge, Nana taught me how to see, how to watch. In Australia, wherever I travel, both tjintar-tjintar and kaanka are always close by. Tjintar-tjintar is the message bird, the dancer who delivers both good and sad news. No longer fearful, I feel reassured by his presence. Kaanka has become my most defining bird. I believe she is my Nana, still guiding me. When I hear her call, I am immediately inclined to regard my actions and words with kindness, as she instructed. Often, she greets me in the early morning as I leave for exercise or work. Most evenings, when the sun is closest to the horizon, she sits outside my house talking loudly, reminding me of the importance of self-evaluation and responsibility. Kaanka reminds me to remember Nana’s teachings, and to stay humble as I journey on my path.

It has been my privilege to learn snippets from cultures outside my own. In 2018, I travelled to Colombia in South America, to attend and present at the 28th International Poetry Festival of Medellín, which celebrates both shamanism and poetry. During the opening ceremony, the shamans welcomed us. This seven-day event was an incredible experience for me. During my time in Medellín, I met with three South American women poets: Negma Coy (Maya Nation) from Guatemala, Alba Eiraji Duarte Portillo (Guarini) from Paraguay, and Rayen Kvych (Mapuche) from Chile. Through an interpreter, we spent time talking about the Stolen Generations and the sadness I carry inside me. This ongoing chapter of Australian history shocked and saddened these cultured women. They explained to me that Grandmothers’ Law should never be broken; it is a cultural law that should remain intact. My new friends reminded me of the importance of my role as grandmother: to mentor a positive and encouraging presence; to affirm a loving companionship; and to foster a long view of family connection, as all children crave a sense of belonging.

These women reminded me that Grandmothers’ Law is an ancient law, bound through all indigenous cultures. They were appalled that the sanctity of Grandmothers’ Law for Aboriginal Australians has, for generations, been broken by ongoing government policies of child removal. I remember them saying in dismay, ‘Even war doesn’t do that!’ These three generous women told me about the Grandmother Ceremony they honour in each of their villages, and assured me that they would pray for the grandmothers who have suffered the traumatic legacy of the Stolen Generations. And, through the interpreter, we prayed together for the rich and sacred blessing of grandmothers to continue in all our families.

This an edited extract from the essay ‘Grandmothers’ Law Should Never Be Broken’ by Ali Cobby Eckermann from Grandmothers: Essays by 21st-Century Grandmothers edited by Helen Elliott and published this month by Text Publishing.

Ali Cobby Eckermann is an award-winning writer of poetry, memoir and fiction. Her poetry collections include little bit long time, Kami and her most recent, Inside My Mother. Her verse novel Ruby Moonlight won the 2013 NSW Premier’s Literary Award for Poetry and Book of the Year Award. Cobby Eckermann was awarded the inaugural Windham-Campbell Literature Prize from Yale University in 2017. 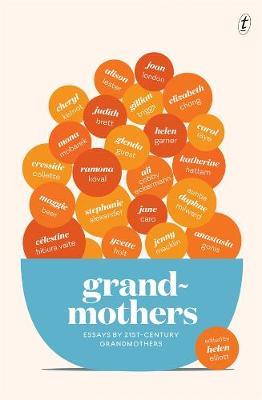