The Myth Of Angry Teens

YA author Lili Wilkinson writes about teenagers who don’t hate their parents and aren’t angry with the world. Here she tells us why.

We’re constantly told that there’s a war going on between adults and teenagers. Even Socrates was in on it – he said that youth “show disrespect for their elders… they no longer rise when elders enter the room… they contradict their parents… and tyrannize their teachers.” The thing is, although there is undoubtedly some continual low-level conflict, I think the war is largely imaginary.

I’m not interested in writing about teenagers who hate the world, hate their parents, and are just generally angry and messed-up. My teen characters are sometimes angry, yes. But they’re usually angry about stuff. Frustrated that they don’t have as much control over their lives as they’d like. My characters do plenty of angsting about love and relationships, but never at the expense of their intelligence. We all fall in love. We all do dumb things when we fall in love. But the best of us use those experiences to learn and grow.

I think I was a pretty typical teenager. I had crushes. I talked on the phone a lot. I copied song lyrics out into my diary. But you know what I didn’t do? I didn’t hate my parents. I didn’t rebel against authority. My angst was largely internal.

So when I read YA as a teenager, I could never understand this weird gulf between teens and parents. Parents often seemed to be just cardboard plot devices, there to place yet another obstacle between the protagonist, and whatever they wanted. I didn’t recognise these generic, rule-enforcing, conservative adults. My mum was a vegetarian who was obsessed with dragons, and my dad did naked yoga every morning in the living room.

I love writing parents. I love making them interesting and funny and real. In A Pocketful of Eyes, Bee’s mum is a Dungeons & Dragons playing, crushed-velvet wearing nerd. Ava’s parents in Pink are socialist lefty intellectuals. Penny’s dad in Love-Shy and his boyfriend like to stay at home on a Friday night and do really ugly jigsaw puzzles. Sage’s parents in The Zigzag Effect are struggling after moving to a new city.

People often ask me how I get into the mindset of a teenager. The answer is, I don’t. Because I don’t think the things that teenagers want are that vastly different to the things that adults want. We all want to be happy. We want to be in control of our lives. We want to make the world a better place. We want to love, and to be loved. The war between adults and teenagers is imaginary because, really, we’re all on the same side.

Lili Wilkinson is a reader, writer and academic. She’s written eight books that have been published in eight countries. Her latest book is The Zigzag Effect. You can follow her at @twitofalili 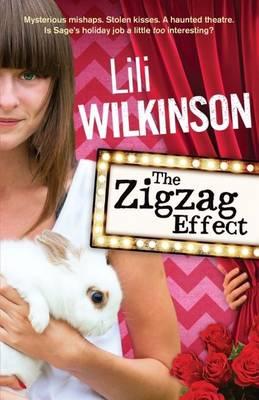