The lies we tell, you and I

Chris Somerville writes on the anxieties of literary taste, and the lies we tell to cover them.

When I was around nineteen or in my early twenties, I went into a second hand bookstore near my house. Where I live, on the Gold Coast, is not the best place for bookstores, but there are a few great second hand ones scattered about. I was browsing through the fiction when I spotted a book that I really liked, but already owned. Still, I pulled it down and opened it, only to recognise my own handwriting at the top of one of the first few pages. It was in blue pen.

What I felt then was a curious new blend of embarrassment. I felt dismayed and I wasn’t entirely sure what to do. For a brief moment I considered tucking the book into the back of my pants, letting my shirt fall over it and then walking out. I could then throw it into a canal near my house on the walk home. My thinking was that the book still belonged to me – it had my handwriting right there in the front. But, as we know, stealing is wrong and on top of this it seemed pretty unfair to steal from a bookstore. Instead I took the book and shoved it behind a row of paperbacks, between them and the back of the shelf, so it was out of sight. Then I got out of there. A lot of it hit hard, I suppose, since I’d given it to a girl I’d had a crush on. I also knew that the time period was small enough for her probably not to have even read it, but what really got me was that it was a favourite book of mine, and I was convinced that anyone else would like it just as much.

In the first creative writing workshop I did at university, every week we’d have to go around the room and say what we were reading. Most weeks, I would usually lie. I’ve not always been the greatest reader of novels. I’d buy a lot of them, but then let them sit in a pile beside my bed. Sometimes I’d have the intention of reading them, but then I’d give up, or I’d move on to something else. There’s just so much else to read, I’d think. I’d also always get incredibly anxious about sharing what I’d been reading. I’d dread it. I assumed that everyone else would judge my taste in books, especially in a creative writing class, as I inevitably did theirs, even when I was telling myself that I shouldn’t do that sort of thing. Usually I’d just try and think about what was the most impressive book I had, and then just say I was reading that, feeling something close to triumph. Soon after that, it didn’t matter if I owned it or not, as long as I’d read a few details about it on the internet. I told everyone I was reading Scoop by Evelyn Waugh, even though I’d only made it through the first page (and afterwards just discarded). My teacher just nodded once and then moved on to the next student, and I noticed how bored we all looked.

In U & I, Nicholson Baker’s love letter to the work of John Updike, he admits towards the start of the book to having read less than half of everything Updike has written. He recalls, ‘In an early story a character leans his forehead against a bookcase, and considers “all the poetry he had once read evaporating in him, a vast dying sea.”’ Baker then goes on to say, ‘I remember almost nothing of what I read.’ When I read this I felt a small surge of familiarity, since, just like Baker, all of the fiction I’ve read usually ends up as one memorable line or scene, and then I forget the rest of it.

All I can remember from Don DeLillo’s Americana is the narrator’s pain at his wife wearing a sombrero and writing poetry while alone in their apartment. The only thing I remember from J.D. Salinger’s Raise High the Roof Beam, Carpenters, is one of the Glass children writing notes on the bathroom mirror in soap. All I can recall of Jonathan Lethem’s quite large novel, The Fortress of Solitude, is the protagonist impersonating a mugger to impress two girls beside a lake at night.

It felt like this also allowed for the prospect of lying about what you’ve read so far. If all I can remember is a few lines from books that I’ve loved, why not just learn a few scant details about others that I’m supposed to have read? At the time it felt like everyone had read way more classic literature than me, and I was struggling to keep up, so usually I applied this to a lot of these books. I knew Light in August was about a pregnant girl, ‘Hence the title,’ I’d say, in a way that makes me cringe to remember. If I’d read a bad review of a novel, I’d pretend I’d also read the book and dismiss it in conversation. That I hadn’t read a word of, say, Bret Easton Ellis’ Glamorama, didn’t stop me from complaining that it was terrible. This was mostly how I was in my early twenties; fairly opinionated about books I’d never finished.

In the past few years I’ve tried to take it easy when it comes to literature. I’ve let my actual, not invented, taste become a little more unfocused. Though I’ve never been much for new year’s resolutions, I decided at the start of this year to read more novels in full. Last year I mostly read short story collections and only got around to reading about three novels, cover to cover. At the time of writing I’ve read five so far. I’m trying to better myself. At the moment I’m reading Cory Taylor’s Me and Mr Booker. At one point the narrator, a teenager called Martha, drives her father from her mother’s house to the hotel that he’s staying at. He and her mother have split. He’s a nasty piece of work for the most part, a bully, but at one point there’s the exchange:

‘Why don’t you just get out while you can?’ I said. ‘You hate it here. All you ever used to talk about was how much you hate it here.’
‘I’ve mellowed,’ he said.

I felt for the guy a little bit. I like to think that I’ve mellowed too.

Chris Somerville is a writer who lives in Queensland. His first book, We Are Not the Same Anymore, will be out in March. 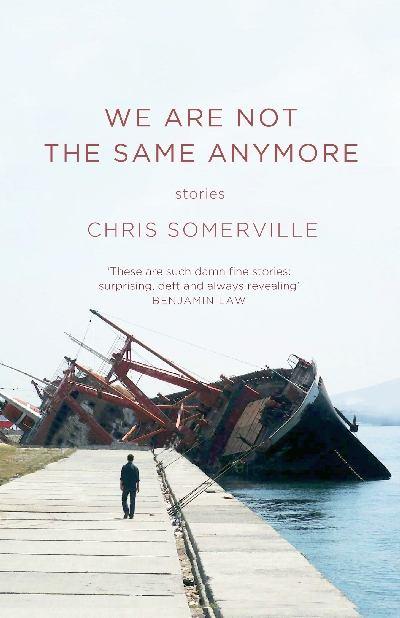