The best new crime reads in May

He Started It by Samantha Downing

To say a book has a twist is sometimes a spoiler: you’ll find yourself living in a constant state of suspense, waiting for when it’ll happen. I don’t think saying that He Started It has twists is any kind of spoiler, because, dear reader, this book is absolutely packed with them. Every chapter ends with a new shock. Surprises come out of every corner. And I loved it.

Beth is on a road trip with her siblings, Portia and Eddie, and her grandfather. It’s not the first time they’ve been on this road trip, but this time they’re twenty years older, and their grandfather is in an urn. The end point is scattering his ashes at the trip’s final destination. It’s what’s in between that’s going to be hard. Two weeks of travel with two siblings, two extra spouses, and two decades worth of suspicion and memories everyone has tried to forget. But somebody hasn’t – there’s a car following them. Strange things are appearing, disappearing. And the question of who the hero is in this situation has an answer that becomes blurrier with every page.

Samantha Downing is a riveting writer. The slow unpeeling of each layer of the family’s past is like a luxurious dinner, delicious and thrilling. It’s a love letter to both psychological thrillers and the winding roads of the United States and the bizarre roadside attractions you can find along the way. It’s as tangled as most family relationships and as dark as a cold heart. Fasten your seatbelt – and don’t let anything out of your sight.

Liz is a paediatric doctor on call at a hospital and she’s already tired and overwhelmed when she gets the call to check up on a baby; it’s sick, but what’s wrong is unclear. When she arrives, the baby is one she knows: tiny Betsey, daughter of Jess, an old friend from parenting classes a decade earlier. But Jess is evasive, not herself, and when the source of Betsey’s discomfort is found, Liz is faced with the worst choice of all: does she call it in? What really happened to Betsey? And how can one little disaster cause such shockwaves through their circle of friends? Full of secrets, tension and unbearable thoughts, this is a harrowing, gripping read.

The Satapur Moonstone by Sujata Massey (available 18 May)

If you’re feeling the loss of a Phryne Fisher and desperate for some jaunty 1920s shenanigans, look no further. In Sujata Massey’s second Perveen Mistry book, you’ll find a lot to delight in, and it’s recommended by Kerry Greenwood herself.

It’s 1922 and Perveen, Bombay’s first female lawyer, is summoned to the kingdom of Satapur, where the royal family has been wracked by a deadly curse. With the remaining young prince’s education an important pathway to becoming the man the kingdom needs, nobody’s in agreement on how he should be raised, and a lawyer is called – the only one who can talk to the women in charge, who do not speak to men. But the curse is not done – and Perveen is not immune from its dangers. A brilliant historical mystery.

Fourteen years ago, Lena Beck vanished from a party in Munich. Her family never gave up on seeing her again, and their hopes finally seem answered when a woman is rushed to hospital following a car accident, along with a young girl called Hannah who insists the woman is her mother, Lena. So where has Lena been all this time – and who has held her captive? Answers become murky when Lena’s parents arrive and are shattered to realise that the woman is not their daughter. So, what has really been happening in that shack in the woods? With enough twists to have you contorted all over your armchair, this shocking psychological tale will keep you chilled and thrilled.

The Long Shadow by Anne Buist

Issy Harris is not expecting to like Riley, the outback town not even on her radar until her husband is sent there for the thankless task of deciding whether to close down the town’s hospital. Issy dutifully follows him, toddler in tow, and takes on her own new role: running a postnatal therapy group. Riley, however, is a town of many secrets, and when Issy asks for the mothers to share their thoughts on paper and finds one of the replies says ‘The baby killer is going to strike again. Soon’, she is horrified. Is this directed at her husband and his unloved position? Is it serious, or ridiculous? As the threat grows more and more real, Issy searches deeper into the town’s past, realising that the baby killer did indeed strike before, years earlier – and that figuring out the mystery of decades ago may help save the life of a child now. This is another great psychological thriller by Anne Buist, author of the popular Natalie King forensic psychologist series.

The Lizard by Dugald Bruce-Lockhart

Alistair Haston arrives at the Greek Islands with a plan: to become a breezy, independent kind of self-made man, the opposite to his currently buttoned-up, indecisive self, recently ditched by his girlfriend Ellie. His plans are immediately destroyed by a particularly heavy night that ends in all his documents and cash stolen. He’s got to find some work – and fast. A job as a labourer ends swiftly and Haston is lost – until he reconnects with a man he met on the boat over to Paros, and who gets him a different kind of job: recruiting tourists to pose for a painter on the island, who offers them money, and more. It’s cruisy money and a great plan, until the body of a missing tourist is found – and Haston is the one accused of the crime. As the dead bodies continue to pile up and Haston goes from emotional philosophy student to chaotic accused murderer on the run, this wild adventure is the sun-soaked, messed-up holiday of every reader’s favourite nightmare.

Who We Were by B.M. Carroll

In another very personal attack directed at me (as somebody who also recently celebrated twenty years from graduating high school) B.M. Carroll’s incisive look into the high school years – and the subsequent decades that change you – is as gripping and thrilling as a year twelve party.

Katy is emailing all her old classmates, hoping to prepare an updated yearbook, including School Captain Annabel, who has enough going on to not have time for any reunion; Luke, who’s enjoying his life afterwards far too much to care about the past; Melissa, whose future isn’t what she expected; Zach, who’s a better person now, he thinks; and Robbie, struggling then, miserable now. When somebody starts sending around updated yearbook entries that are extraordinarily personal and cruel, it’s clear not everybody has let go of the past – and that not everyone might make it to the reunion alive.

This is the third and final book in Ragnar Jonasson’s Hidden Iceland series, a mesmerising, originally paced trilogy that tells the story of Detective Hulda Hermannsdóttir – starting with Hulda at retirement, then book two as she’s at the peak of her game, and now, as a younger woman, investigating an isolated, snowbound farmhouse where something has gone horribly wrong. Each can be read on its own, or from third to first, but for those invested from the start, watching the revelation of Hulda’s past instead of an incoming future makes for a glorious finale. For those new to Hidden Iceland, bunker down and prepare to be enthralled by Jonasson’s atmospheric, chilling and beautiful writing.

We Begin at the End by Chris Whitaker

Some books are so vivid they’re almost exhausting: you become so emotionally attached so swiftly that every moment feels like tension that clamps your heart tight. Chris Whitaker’s We Begin at the End is that book: brutal, devastating, kind, hopeful, every word in the damn dictionary. It’s enough to slay you, and you can’t put it down.

Vincent King is out of jail for the first time in thirty years; he was fifteen when he went in for killing eight-year-old Sissy Radley. Now, Sissy’s grown-up sister Star is self-destructing and her daughter, Duchess Day Radley – a thirteen-year-old self-described outlaw – is desperately trying to keep her family together. The town is beautiful on the outside and ugly deep inside, and Vincent’s return is going to see things change, for better or for worse – or for the worst. When Duchess, a gloriously memorable character if there ever was one, unwittingly sets the town on a path of destruction, Vincent is brought right back in and becomes part of everything. Thirty years in jail is longer than anybody thought he deserved, but it might just have been long enough for him to see straight again. 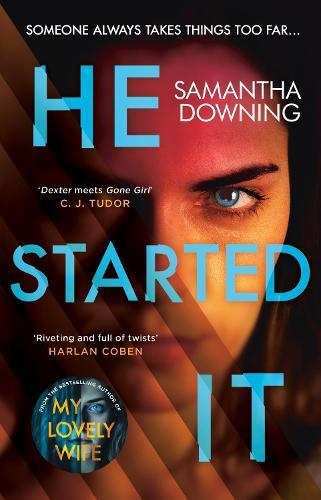 Written in Blood: The Sunday Times Number One Bestseller