The 22 Murders of Madison May by Max Barry

I like to review Australian crime books, partly because it’s always good to boost local writing – it’s something that Readings has championed since the beginning – but also because it feels like authors here are doing much more interesting things than in other countries. I saw it this month in John Byron’s unexpected The Tribute and in the format of Nicola West’s Catch Us the Foxes. Australian writers are doing something new with the genre, and it makes them a real pleasure to read. You can add to that list Melburnian Max Barry’s The 22 Murders of Madison May, a parallel-universe thriller where real estate agent Madison dies in the first few pages, and then college student Madison dies again a few chapters later, and then – well, it doesn’t get better for her after that.

After the first Madison is stabbed to death while showing a house for sale, reporter Felicity Staples inadvertently gets the story. Her hunt for clues – mainly, the meaning of what was slashed into the wall of the house by the killer – leads Felicity on a chase that ends with a strange man pushing an object into her hands and shoving her off a train platform. When she gets out, though, the world is not the same as it was. There’s no annoying clock above her desk anymore. She’s got one less cat. And in this world, Madison May isn’t dead, and nobody knows what murder Felicity’s talking about. But somewhere, in the streets of New York, a man is searching for Maddie May, somebody is searching for that man, and Felicity, who has no idea what the hell is going on, is about to get involved in the story of her life. Many lives over.

This is a cinematic, vastly entertaining action-adventure that stills the world around you as you read it – because anything could happen and you still wouldn’t look up from its pages. A wild, epic ride!

Catch Us the Foxes by Nicola West

Marlowe Robertson – better known to everybody in her hometown as Lo – is the news photographer for the local fair. Her beat is to take pictures of everybody having a good time, but mostly of this year’s showgirl: Lily Williams, Lo’s old friend and sometime rival. Then, just before the fireworks, Lily is murdered, and Lo is the one to find the body, carved with bizarre symbols that her police officer father firmly instructs her to keep secret. An intrepid reporter, Lo is desperate to prove her ability to sniff out a story, and there is much more to Lily’s death than she ever expected. How much can a small town really hide? What is justice in an environment that so deftly covers up the truth? You’ll be transfixed and wrongfooted alike in this electrifying thriller.

The Deep by Kyle Perry

Not far from Hobart, above the highest sea cliffs in the southern hemisphere, lies Shacktown: abalone town, holiday destination, and home to the Dempsey family, who run the entire place – whether people realise it or not. Ahab and Mack are Dempsey cousins, both trying to move away from the grip of the family and its illegal dealings and into some semblance of a straight life. When 13-year- old Forest Dempsey – missing for seven years – washes up alive on the beach with an ominous message etched into his back, Ahab and Mack are drawn back into the family’s grip. When the Black Wind blows, the sea is dangerous, but not all danger is in the water. This thriller will hook you in – so prepare to be caught in the rip.

A Voice in the Night by Sarah Hawthorn

Lucie is a newcomer to London, working as a lawyer and concentrating all her energies on her career. Her fresh life is thrown into unease with the arrival of a letter: ‘At last I’ve found you. A shock, I’m sure. But in time, I’ll explain. Martin.’ Martin was a lover from 20 years ago – who died in the 9/11 attacks. She can’t believe it’s him, but gifts arrive, and even phone calls with that voice she’s missed so much for so long. But how could it be Martin, after all this time? Sarah Hawthorn’s debut book is a sexy, seductive slow burn of psychological suspense.

The Tribute by John Byron

Sometimes, when you’re reading a book, it takes a while to sense something else is sneaking up on you in its pages. There’s a slow release of information that makes you realise you’ve begun a book thinking it’s one kind of story, and been skilfully manipulated into reading another. The Tribute is this kind of book: opening as a police procedural centred on Sydney homicide detective David Murphy, who leads the case of an exceptionally gruesome murder where the killer took a leisurely weekend to whittle a human body down to bones and cartilage. After a second murder focuses on the victim’s muscles, the police bring on the expertise of Jo Murphy, an art historian – and the detective’s sister. Featuring historical dissection texts, this is no mainstream procedural, and the characters bursting out of these pages have more to them than you could ever guess. This is no ordinary crime book, and there are no ordinary people in this extraordinary read.

Girl One by Sara Flannery Murphy

Josephine Morrow is not like most other girls. In fact, she is one of nine girls in the world created purely by their mother’s genes through parthenogenesis, a form of asexual reproduction, helped by a doctor who took his secrets to his grave when he was burned to death years ago, along with Girl Nine. Jo is at college, away from her original life, when she learns her mother is missing – and the only way to find her is to trace her way back through the other Girls. Despite decades of publicity, articles, and books on the Girls, a lot is still hidden about how the experiment began and the less-than-normal outcomes that were concealed from the children themselves. This is a meaty, thrilling story of power and who truly wields it.

I Know What I Saw by Imran Mahmood

British crime writers love to unsettle everyone with their unreliable narrators. In I Know What I Saw, even as we witness a crime alongside our protagonist, everything’s still thrown into doubt. Xander Shute is living on the streets, homeless despite once being wealthy. After getting wounded in a fight, he sneaks through a slightly open door into somebody’s seemingly empty home. Before he has a chance to recover and get out, he finds he’s not alone. What happens next leads to a woman’s death that only becomes more mysterious, despite Xander being a witness. Police say the victim couldn’t have even been there, and the killer is still at large. What is real, then, and what isn’t? And how can Xander push through to find the truth – if he even wants to? A thrilling psychological mystery with an unexpected protagonist.

When You Are Mine by Michael Robotham

When Constable Philomena McCarthy is called to a domestic violence incident between a battered young woman and an arrogant man who won’t give his name, she ends up arresting him – only to find out he’s Detective Sergeant Darren Goodall: a cop, a hero, and nobody’s interested in her version of events. She’s already trying to fly under the radar since she’s the daughter of a London gangster, but she can’t let this stand. As Phil develops an intense friendship with the victim and attempts to avoid being exposed by the press, she tries to figure out what to do about this violent cop. Then a journalist who knows about both her past and Goodall’s winds up dead. Michael Robotham’s newest electrifying standalone thriller really doesn’t need me to write a review to sell truckloads of copies. This is a book about learning who you can trust, who you can’t – and who really needs protecting.

The Therapist by Helene Flood (translated by Alison McCullough)

Sara knows better than anybody that what people tell you and what actually happened are not always the same thing. She’s a therapist and spends all her days in the rift between words and truth, but even she can’t figure out what’s going on when her husband Sigurd’s best friend calls to ask why Sigurd hasn’t arrived for their weekend trip yet. Sigurd had already left a message for Sara hours before to say he was there with his friends. When it becomes apparent he’s missing – and that the dazed Sara isn’t above suspicion – she must figure out what in their shared past could have led to this. It’s wonderful to be back in the snowy psychological turmoil of a Scandinavian thriller, and this excellent Norwegian translation is one that will hook you right in.

Writer Gerry Anderson has just moved to Baltimore to work on his newest book (or not work on it, as it were) when he has the accident. It’s because of the letter, the one from an address on Fait Street that isn’t real. Now he’s stuck in a bed, unable to move, with a live-in nurse and only his own thoughts. A woman keeps calling him, saying that she’s Aubrey, but there is no Aubrey. Aubrey was just a character in his book, one who lived on Fait Street, one who catapulted Gerry to success. She’s not real and his nurse says there are no calls, no letters. Nothing is clear, not least what really happened in the past, or who Gerry has been all these years, or how the dead body ended up next to his bed. This is a rich, tangled dream where nothing is to be believed, with a plot that demands to be desperately read. 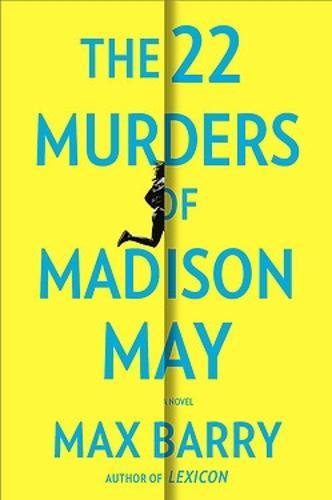