Lightfall: The Girl and the Galdurian by Tim Probert

As keepers of the Endless Flame, Pig Wizard and his adopted granddaughter Bea live a quiet and peaceful life. But all that changes one day when, while walking through the woods, Bea meets Cad, a member of the Galdurians, an ancient race thought to be long-extinct. Cad believes that if anyone can help him find his missing people, it’s the Pig Wizard. But when the two arrive home, the Pig Wizard is nowhere to be found - all that’s left is the Jar of Endless Flame and a mysterious note. 8+

Gert And The Sacred Stones by Marco Rocchi & Francesca Carita

This timely tale of an endless war between humans and nature follows young orphan Gert, whose land is shrouded in a thick fog hiding ferocious, fantastical animals that besiege her village. Gert sets out to make sure no one else suffers what she has as a result of the war, but to do this she’ll have to do what is forbidden of young women like her - become a warrior. Unfazed, Gert sneaks into the initiation test, beginning an adventure that will prove to be about much more than revenge. 12+

Beetle & the Hollowbones by Aliza Layne

In the eerie town of ‘Allows, some people get to be magical sorceresses, while other people have their spirits trapped in the mall for all eternity. Then there’s twelve-year-old goblin-witch Beetle, who’s caught in between. Beetle’s best friend, Blob Ghost, is one of the beings cursed to haunt the mall forever… but if they don’t escape soon, their afterlife might be coming to a sticky end. Beetle has less than a week to rescue Blob Ghost, reconcile with a best friend, and confront her own demons. 8+

Growing up sounds terrible. No one has time to do anything fun, or play outside, or use their imagination. Everything is suddenly so serious. Who wants that? Not Lora. After watching her circle of friends seemingly fade away, Lora is determined to still have fun on her own. A tea party with a twist leaves Lora to re-discovering Alexa, the ghost that haunts her house. Lora and Alexa are thrilled to meet kindred spirits and they become best friends … but not everything can last forever. 8+

Quests! Plots! Evil Plants! Magic and mayhem! Join a tight-knit squad of animal companions on a wild adventure investigating a sinister botanical conspiracy among the furry nobility. Motivated by rivalries, a strong moral compass, and a lust for adventure, the critters navigate not only perils and dangers of the natural world, but also perils and dangers … of the heart! Their journey takes them through haunted dungeons, swamps, and high society balls, and brings them closer together as friends. 8+

Witches of Brooklyn by Sophie Escabasse

Effie lost her mom. Lost her home. And now she has to live with two strange aunts who she’s never met before. Life in Brooklyn takes a strange twist for Effie as she learns more about her family and herself. With new friends who will do whatever they can to be there for her, a cursed pop-star, and her new magically-inclined family – Effie’s life is about to get interesting. 8+ 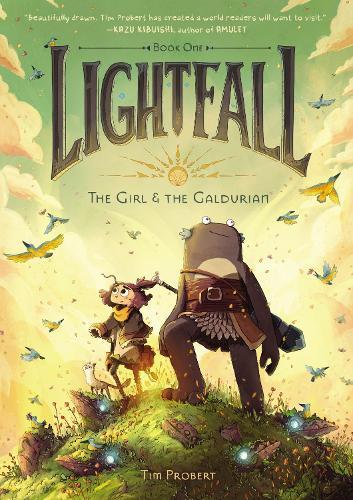 END_OF_DOCUMENT_TOKEN_TO_BE_REPLACED

Jo: An Adaptation of Little Women (Sort Of)

Shirley and Jamila Save Their Summer