I consumed Silver Linings Playbook in this order: the film trailer, the book, then the film itself.

After watching the trailer a few months before the film release, I bought the book with the assumption I would be reading a romantic comedy. And that’s essentially what the film is – a smart, funny, heartwarming romantic drama. But that’s not how I would classify the book at all.

Both the film and the book follow the same basic plotline – thirty-something Pat is fresh out of a rehabilitation facility and has moved home with his parents. His goals are to stay fit, get his life back together and, most importantly, reunite with his estranged wife. He befriends Tiffany, a fellow damaged soul, and their friendship helps him to realise some truths about his life.

In the book, it’s clear very early on that Pat is an unreliable narrator, and the reality he has built around himself is not the entire truth. There are mysteries about Pat and his past to be unraveled. His relationship with his therapist, his brother and his parents is explored in-depth, and while Tiffany is an important character, his friendship with her is not the main focus of the novel.

In the film, Pat’s evolving relationship with Tiffany is the central plotline and the other characters and events largely spin off this focus. The film’s best and most pivotal moment – a scene that draws all its characters together into one room, ups the stakes and sets up the tension of the third act – doesn’t actually occur in the book. In fact, the film’s entire third act is almost completely separate from the book’s final third. (If you’ve seen the film, here is a fascinating piece by David O Russell on his experience of writing that crucial scene.)

The most critical difference between book and film is how each handles the traumatic event from Pat’s past that led to his admittance to a rehabilitation facility and the breakdown of his marriage. The details of the event and its aftermath are different in each, and how the information is revealed is also different – in the book, the truth is hinted at but not fully revealed until the end. In the film, a different truth is explained clearly and early on.

This creates two different versions of Pat. In the film, Pat is an upfront character – we know what’s wrong with him, how he got to this point and we can see what is making him better. In the book, Pat is a darker character and his motivations and underlying issues are murkier. His process of healing is messier and the book doesn’t offer any easy answers or neatly tied up endings.

I enjoyed both the book and the film in different ways. The novel was a quick and fairly addictive read. Pat’s narrative voice is rather unusual and almost childlike, which takes a few chapters to get used to, but his journey is fascinating and a lot more varied (with a larger focus on fitness, football and therapy) than his journey in the film.

The film offers a more conventionally satisfying experience, particularly if you enjoy a smart, fresh take on a love story. Jennifer Lawrence brings something to the character of Tiffany that the book version (who is quieter and more reserved) perhaps lacks. Also, the film has a great dance montage and if there is anything that brings me joy in a film, it’s a well done training montage.

If you have yet to see the film, I would recommend reading the book first. You’ll better appreciate the novel’s complexities without having the film as a reference point and you’ll enjoy the film a little more having read the book first. Quite a few of the film’s scenes – Pat’s session with his therapist and Pat’s time at a football game – have greater meaning if you’ve read the book. 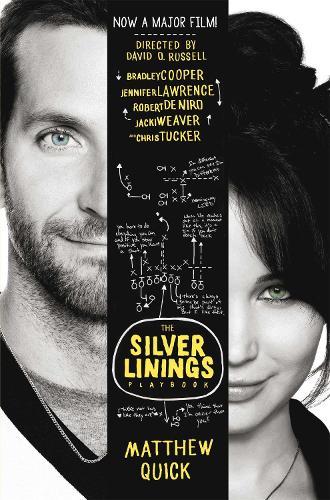