Calling all amateur sleuths and bookish detectives! Here are some of our favourite mystery books that will test your powers of deduction and observation.

The Puzzling Pearls (Plum and Woo, Book 1) by Lisa Siberry

Hannah Plum and Patti Woo have nothing in common, but they’re stuck at the beachside Heartbreak Hotel together while Hannah’s dad and Patti’s mum are out birdwatching and - yuck! - falling in love. When a hotel guest’s beautiful pink wedding dress is stolen, fashion-obsessed Hannah is determined to get to the bottom of it. With a reluctant Patti (a conveniently avid mystery book reader) in tow, the two girls are launched into an ever-deepening mystery.

The first in a quirky new fashion-focused mystery series, The Puzzling Pearls combines suspicions and sleuthing with the very relatable challenges of a newly blended family.

Daisy Wells and Hazel Wong are in Egypt for Nile cruise on the SS Hatshepsut. They’re hoping to see some ancient temples and a mummy or two; what they get, instead, is the murder of Theodora Miller, the leader of the mysterious Breath of Life society. Theodora’s timid daughter, Hephzibah, is framed for the murder, but everyone within the society has a reason to want Theodora dead…

This is the final novel (sob!) in the beloved A Murder Most Unladylike series, and it is Daisy and Hazel’s most difficult (and most dangerous) case yet.

The Detective’s Guide to Ocean Travel by Nicki Greenberg

Pepper’s father is the captain of the RMS Aquitania, a luxury liner that transports people across the Atlantic Ocean. After years of begging, Pepper finally gets to join her father on his journey, accompanied by her strict (but very seasick) governess. Pepper soon makes friends with other kids on the journey: Sol, an aspiring pastry chef; Toby, who is accompanying his mysterious father; and Norah, an Irish girl with a big singing voice. When the fabled Saffron Diamond is stolen from prominent actress Perdita West during an impromptu swimming race, Pepper and her new friends get swept into the case.

The Inkberg Enigma by Jonathan King

Miro and Zia live in Aurora, a fishing town nestled in the shadow of an ancient castle. Miro lives in his books; Zia is never without her camera. The day they meet, they uncover a secret. The fishing works, the castle, the town council: all are linked to an ill-fated 1930s Antarctic expedition. But the diary of that journey has been hidden and the sea is stirring up unusual creatures. Something has a powerful hold over the town.

Six apartments are rented to six families in the exclusive Sunset Towers, a building with a perfect view to the mansion of millionaire Samuel Westing. When Westing suddenly dies, they’re summoned to his mansion and are told that one among them has murdered him. Whoever can solve the puzzle of his murder will become heir to his enormous estate!

This classic mystery won the 1979 Newbery Medal in America, and it’s still an entertaining read with a vibrant cast. Is the murderer Mr Hoo, the restauranteur who claimed Westing stole his invention? Is it Grace Wexler, the status-seeking mother? Could it be Otis Amber, the 62-year-old delivery boy? Surely it can’t be Turtle, the 12 year old who likes to play the stock market?

The Fire Star: A Maven & Reeve Mystery by A.L. Tait

Lady Cassandra is set to marry Sir Garrick, and arrives at the castle with her maidservant Maven. But when Lady Cassandra’s Fire Star jewel is stolen, Maven and Sir Garrick’s squeamish squire, Reeve, have only three days to solve the mystery. If they don’t, they’ll lose everything.

The lively mediaeval setting really sets The Fire Star apart from other mysteries. Not only is it incredibly atmospheric, there are some interesting things to note about class differences and the position of women in the Middle Ages. Readers will love the growing friendship and co-operation between odd couple Maven and Reeve, and of course, enjoy chasing down the unspooling clues and red herrings.

Sherlock Bones and the Sea-creature Feature by Renee Treml

Sherlock Bones is a mystery-solving tawny frogmouth skeleton that lives in the Natural History Museum. When Sherlock hears rumours about a potential swamp monster and missing octopus, he rounds up his two trusty partners, the stuffed parrot Watts and chocoholic racoon Grace, to go looking for monsters in the museum at night.

This zany junior graphic novel (the second in the Sherlock Bones series) is full of incredible interesting facts, animals (real and made-up), jokes, and fascinating illustrated exhibits. And yes, the mystery does get solved by the end!

When best friends Catvinkle and Ula are asked to defend two sheep accused of eating Amsterdam’s tulips, they’re not sure what to believe. The sheep say they’re innocent, but they do look very sheepish. A court trial has been ordered by conniving Twinkiepaws, and Catvinkle will need the help of a wolfhound, a llama, two travelling koalas, a pair of Russian bears … and a very special bird to win the case.

This is a sweet, animal-focussed tale that emphasises empathy, friendship and justice. Young readers will love the distinctive personalities of all the animals, the funny dialogue and Laura Stitzel’s lovely illustrations. 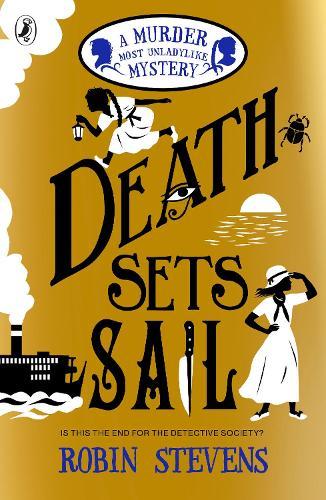 Mystery and detective fiction for kids

A Case of Grave Danger (The Violet Veil Mysteries, Book 1)

His Name Was Walter