Jenna Guillaume is one of the six authors shortlisted for the 2019 Readings Young Adult Book Prize for her uplifting and witty YA novel What I Like About Me. In this interview, she talks about the spark that created What I Like About Me, where the wonderful character of Maisie and her story came from, and body representation in YA fiction.

Can you tell us a bit about the initial spark of this novel? What made you want to write it?

I’m a huge fan of rom-coms – especially summer romances – but I felt like all the stories I was consuming were overwhelmingly American. I wanted to see a fun summer romance with an Australian setting – so I decided to write one! Along the way it grew and evolved, but that was the initial spark.

Maisie is such a great character and grows so much over the course of the book. What do you hope readers will take away from Maisie’s story?

I hope readers enjoy Maisie’s story, and more than anything I hope Maisie’s journey helps readers love themselves a little more. Whether it’s making their own list of things they like about themselves, as Maisie does, or just countering some of that negative self-talk we all experience with more positive thoughts – I hope What I Like About Me leaves the reader feeling that bit better about embracing who they are.

This is such an uplifting book, where romance is depicted as something hopeful and meaningful. What are the benefits of writing romance in teen fiction?

Romance has always been my favourite part of any story. I don’t know why, it’s just how I’m wired I suppose. So I always knew I wanted to write kissing books, to quote The Princess Bride.

I think romance in teen fiction is a really safe way for young readers to explore their desires and figure out what they do and don’t want, what’s healthy in a relationship and what their expectations and boundaries are. On top of that, it’s just a lot of fun and can provide some nice escapism. That said, I very consciously wanted to write a realistic romance in What I Like About Me. The love interest is no perfect, god-like guy – he’s very real and flawed, and honestly I think that makes him more endearing.

Were you inspired by certain rom-com films for this story? And as writer, did you feel like there’s anything different about how a rom-com plays out on the page compared to on the screen?

I was definitely inspired by movies for What I Like About Me. I’m a huge rom-com fan and I think a lot of the tropes of the genre influenced me (sometimes because I wanted to subvert them). But the biggest movie influence was Dirty Dancing, which is explicit in the book – it plays a key role in some of the big scenes. The reason I chose Dirty Dancing was because it’s that classic American summer romance story – I wanted to take that vibe and re-centre it to be in a very Australian setting, with a plus-size protagonist and a bit of dorky guy. And, of course, there’s all the dancing, which has a strong connection to Maisie’s story.

As for the difference between the page and screen in terms of rom-coms, I think with books you get a lot more depth. They tend to be from a first-person perspective and you can explore a lot more of the character’s internal world – although the same applies for any genre, I suppose!

The parts where you describe Maisie’s self-consciousness over her body, and what it’s like to be judged by others for it, are incredibly honest and powerful. Was this raw, jagged honesty something you were deliberately aiming for?

I know I’ve read books where I’ve felt completely seen, and that’s been really comforting. That’s part of what I wanted to achieve with What I Like About Me. I know the way Maisie feels is quite a common experience – it’s definitely something I have gone through myself – and it was important to me to convey it in as honest a way as possible. Writing those scenes made me extremely emotional, because they touched a raw part of myself.

I wanted to explore, more than anything, how insidious those feelings are, and how fraught moving through the world as a fat person can be, when even your loved ones hurt you in ways they don’t quite understand. I hope by writing about it, my readers will feel less alone – or perhaps realise where their own behaviour has hurt others (or themselves).

It’s quite rare for teen novels to really contemplate how our bodies assert themselves in our lives – the way our stomachs soften out when we sit, or a partner touching parts you might dislike. It’s something you do really well in this book. Were you conscious of this when you were writing? And did you have any books you turned to for inspiration when writing this?

When I say I feel seen by a book – it’s in those little moments that you don’t expect to see represented on the page, that you sometimes aren’t even conscious of, but that make you sit up and say “wow, that’s exactly how I feel”. So as I was writing I tried to think about what those little moments are for me in my body, and how they might apply to Maisie.

I think the two books that stick out in my mind that influenced me in this regard – because I felt seen by them in the little moments they represented – are Looking for Alibrandi by Melina Marchetta and You Don’t Have To Say You Love Me by Sarra Manning. They’re very different books and I read them at very different times in my life, but they each reached out to me in their own ways and said “hey, it’s okay, it’s not just you”.

Do you have any other types of YA romances/or body positive stories you’d recommend?

Ohhh I have so many YA romances I love, but some of my faves are: Summer Skin by Kirsty Eagar, Beautiful Mess by Claire Christian, To All the Boys I’ve Loved Before by Jenny Han, Adorkable by Sarra Manning, Anna and the French Kiss by Stephanie Perkins, and Simon vs the Homo Sapiens Agenda by Becky Albertalli.

Jenna Guillaume is freelance writer and editor, who was previously editor-at-large for BuzzFeed Australia, where she wrote about very important things like pop culture, identity, feminism, social media, and Chris Hemsworth’s biceps. Before that, she spent more than half a decade in the features department of Girlfriend magazine. She was also a contributor to Girlfriend Life Hacks, an essential guide to navigating a girl’s completely-awkward-but-totally-awesome teen years.

Read more about What I Like About Me and Readings Young Adult Book Prize 2019 shortlist here. 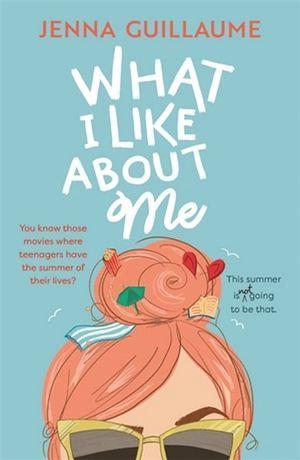