Emily Bitto chats to Kristina Olsson about The Strays

We live in an era infatuated with memory and perspective. In looking back, we interrogate our individual and collective pasts in an attempt, perhaps, to check our own authenticity, to keep ourselves honest. But the truth of the past, if such a thing exists, is as changeable as our needs.

This notion is at the centre of Emily Bitto’s engaging debut novel, The Strays. The story is centred around a group of avant-garde artists in Melbourne in the 1930s, their lives modelled roughly on the Heide circle of John and Sunday Reed, Sidney Nolan, Joy Hester and others. But this is not their story.

‘Heide was definitely an inspiration, but in the end it was almost too dramatic,’ Bitto laughs. ‘I didn’t want to re-create John Reed as the demon father, for instance. But I did want to explore ideas about art and the way artists are portrayed, the competing ideas around gender and stereotype, and the way the artist is situated in the family.’

In The Strays’ nuanced exploration of the artistic milieu, its temperaments and desires, brilliance and blindness, Bitto has achieved this and more. With a skilful use of perspective and memory, and a dual adult–child point of view, Bitto reaches far beyond the well-documented narratives and myths of the Heide players to widen and enrich the notion of the artist as mad or bad or eccentric.

When we meet Bitto’s narrator, Lily, in the first pages of the novel, she is middle-aged, but the story is told mainly through her younger eyes as she recalls a childhood spent on the periphery of a breakaway community of artists, living in ramshackle splendour on the edge of Melbourne. Edges and peripheries are frequent emblems in the story. The child Lily is the outsider to a group of outsiders, longing to be taken in; the art itself is experimental, on the margins. Lily and her friend Eva, daughter of artists Evan and Helena Trentham, spend much of their time perched precariously on the roof of the house, smoking stolen cigarettes and watching the adult parties below, or daring each other to leap from a high ledge above a local swimming hole.

‘I really enjoyed writing from that perspective,’ Bitto says. ‘I hadn’t consciously realised until then that a lot of my favourite books were written from the outsider perspective – The Line of Beauty, The Secret History, Brideshead Revisited. Each has the voice of someone longing to be part of some scene or other; the attempt to be a part of it, the belief that you’ve succeeded, but seeing that, in the end, you haven’t.’

Her own life has provided some material too. Her father was born in the former Czechoslovakia, and escaped during the Prague Spring of 1968, leaving his family and friends. Many years later Bitto, at a similar age to young Lily, found herself the outsider, the observer, when her family moved from Melbourne to rural, small-town Warwick in south-eastern Queensland. ‘But unlike Lily,’ she adds wryly, ‘I wasn’t besotted with my surroundings. In fact, the opposite.’

The Strays also, however, examines ideas of belonging, through the remarkably similar needs of Lily and the adults to merge themselves with a group or an idea or an ideal. All yearn for a sense of difference, but achieve it by donning the field uniform of a group, albeit small and exclusive, and at the expense of others, sometimes explosively. The shadow of consequences falls lightly but tellingly over the tone of the child Lily’s voice.

‘I wanted to look at the way we all change and revise our thinking about our lives as we grow older,’ Bitto says. ‘We might have a desire as a child to be extraordinary in some way, but as we grow and change those desires change too. We might set out to be one thing and then settle for another. Our ideas about ourselves are being constantly revised.

‘I wanted Lily’s voice to reflect that. So she is in there as an adult remembering her childhood; she is nostalgic but it is tainted slightly with what is to come. I tried to empathise with her as an older woman looking back on the choices she’d made, her early dreams. Not regretful – wistful perhaps.’ Like Lily, Bitto grew up an only child, and Bitto also enjoys a close relationship with her mother and her aunt. She has been influenced, she says, by the strong older women around her, and drew on them for that particular process of remembering. ‘But I’m getting older too, and I’m aware that I’m revising my life all the time. That’s a part of what the novel came out of.’

The strong women in her life have also influenced the book’s intense relationships between women: those between Lily and Eva, and between Eva, her two sisters and their mother are infused with an intimacy that female readers will immediately recognise. ‘I’m interested in the mother–daughter dynamic, and the kind of intense female friendships I have experienced. They’re often neglected in favour of the romantic relationship between men and women, but they’re often just as complex,’ Bitto says.

The drama of the artists’ – and the children’s – lives play out in what was then the semi-rural outer suburb of Bulleen, in the genteel decay of a spreading timber and bluestone house and its wild gardens. Through young Lily’s eyes, Bitto creates a world of bohemian charm and emotional danger, a world of the senses that envelops both Lily and the readers. The depiction of place – and our own longing for it despite the pending disaster – is one of the book’s great achievements. As is the absence of judgement – of the characters, despite their flaws, and in the question that hovers over the final pages of the narrative: how do we weigh the collateral damage that genius, and the making of art, almost inevitably wreaks? The Strays will leave that with you.

Kristina Olsson is a writer and journalist. Her most recent book, Boy, Lost, won the Queensland Literary Award for non-fiction, and has been shortlisted for the Victorian Premier’s Awards, the New South Wales Premier’s Awards, and the Stella Prize, and longlisted for the Kibble Award. Her previous work includes Kilroy Was Here and The China Garden (which won the Barbara Jefferis Award). She is currently working on a novel and a piece of long-form non-fiction. She lives in Brisbane. 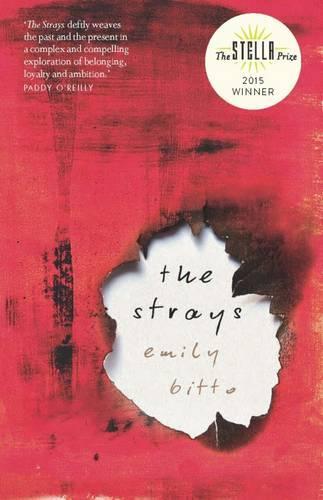