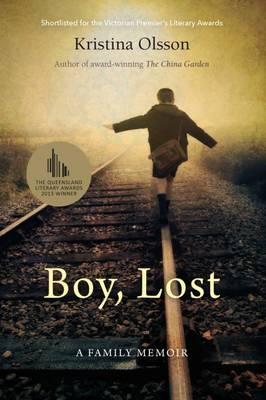 Kristina Olsson’s mother lost her infant son, Peter, when he was snatched from her arms as she boarded a train in the hot summer of 1950. Yvonne was young and frightened, trying to escape a brutal marriage, but despite the violence and cruelty she’d endured, she was not prepared for this final blow, this breathtaking punishment.
Yvonne would not see her son again for nearly forty years.
Kristina was the first child of her mother’s subsequent, much gentler marriage and, like her siblings, grew up unaware of the reasons behind her mother’s sorrow, though Peter’s absence resounded through the family, marking each one. Yvonne dreamt of her son by day and by night, while Peter grew up a thousand miles and a lifetime away, dreaming of his missing mother.
Boy, Lost tells how their lives proceeded from that shattering moment, the grief and shame that stalked them, what they lost and what they salvaged. But it is also the story of a family, the cascade of grief and guilt through generations, and the endurance of memory and faith.

Bringing her journalistic skills to what is described on the cover as a ‘family memoir’, Kristina Olsson uses perfectly balanced prose to weave breathtaking beauty into this sad yarn.

As a 19-year-old, Olsson’s mother, Yvonne, got on board a train bound for Brisbane, hoping to escape the violent man she was married to. Her one-year-old son, Peter, was cuddled in her arms and a second pregnancy – kept secret from her husband – was underway. As she waited for the train to leave the platform, her husband entered the carriage and snatched her little boy out of her arms, telling her that if she ever tried to take his son again, he’d kill them both. The train left the station and Yvonne didn’t see her son again for nearly 40 years.

The response of Yvonne to the theft of her baby is one of the most compelling aspects of this story. Her decades-long internal struggle works as a complex counterweight to her son Peter’s desperate attempts to find his mother. He continually runs away as he gets older, receiving beltings when he’s brought back home.

While Peter has to battle his father, his stepmother, and other people besides, Yvonne has her own demons to wrestle with. And while family can be cruel, it’s the kindness of strangers that helps Yvonne and Peter move painfully forward.

There are no fairytale endings in this book. The damage that’s been suffered by these people is deep and irrevocable, but the dignity and the resilience they demonstrate is at the heart of this beautiful, wistful story. Highly recommended.

END_OF_DOCUMENT_TOKEN_TO_BE_REPLACED

Ten years in the research and writing, inimitably bold, entertaining and irreverent in style, Clare Wright's The Forgotten Rebels of Eureka is a fitting tribute to the unbiddable women of Ballarat-women who made Eureka a story for...

Based on a true story, Burial Rites is a deeply moving novel about freedom and the ways we will risk everything for love. In beautiful, cut-glass prose, Hannah Kent portrays Iceland's formidable landscape, and...