Fox Swift, a new novel for primary school-aged children about a young footy star, has just been released. Author David Lawrence gives us the lowdown on real-life footy star Cyril Rioli’s involvement in the book, and we recap on some other AFL-related books for kids.

Last year I could write on the back of a stamp what I knew about AFL. This year I’m still pretty clueless but there are two new developments. Firstly, the currency in my house is now footy cards and it’s working out particularly well for me. I’ve never seen my 9 & 6 year old more keen to do household chores in exchange for a packet. By the end of the season their dealing skills will be so refined I might give them my life savings and let them loose on the stock exchange.

And secondly, I’ve discovered that I can really enjoy a novel with an AFL theme. Wonders will never cease, etc. For teenagers there’s the debut novel by Melbourne writer Nicole Hayes, The Whole of My World, which combines a girl’s genuine love for the sport with the challenges she faces as she grows out of (or rather is forced out of) playing.

I asked David how Cyril Rioli came to be involved: “Despite being an Essendon fan, I really wanted to have Cyril Rioli as a character in the book. It doesn’t matter who you barrack for, if you love AFL football, you love watching Cyril play. He is spectacular, but also fair. And after meeting him I knew he was the perfect choice. He is a modest champion – a great example to kids that you can be incredibly talented without being arrogant. Cyril shared some stories from his junior football days, such as one about being attacked by plovers during a game on the Tiwi Islands. It was hilarious and found its way into the book.”

As well as agreeing to be a character in Fox Swift, Cyril agreed to share some of his football knowledge. His suggested training drills and tips (including how to kick a ‘grubber’ goal from the boundary) are included in the story.

Fox Swift is an 11-year-old footy star. After arriving in a small country town, he’s forced to battle bullies, cheats and a painfully annoying coach as he tries to turn around the fortunes of a struggling junior football club.

The odds are stacked against him, but in his corner are the brainiest kid at school, a cartoon-drawing class clown, and of course Hawthorn football star Cyril Rioli.

For David Lawrence, writing Fox Swift was a labour of love but he was really keen to attract all readers, not just AFL-fans: “When I was 11, Aussie Rules was all I thought about. I’m sure the book will appeal to any kids who are also footy fanatics but it was also written for boys and girls who aren’t hardcore footy devotees. As part of the writing process it was road-tested on non-AFL fans, who said they loved the book’s humour, quirky characters and clever cartoons drawn by comedian Jo Gill.”

As well as cartoons and footy tips, Fox Swift touches on social issues such as bullying, racism and equality. With AFL as a platform, it seems a wide range of issues can be explored all within a territory that Australian children feel comfortable within as well as enthused about. Even an AFL-clueless like me can get behind that.

Fox Swift is available now. We also have a range of AFL books in store, from board books for the very young to activity books and novels. Check out our range here. 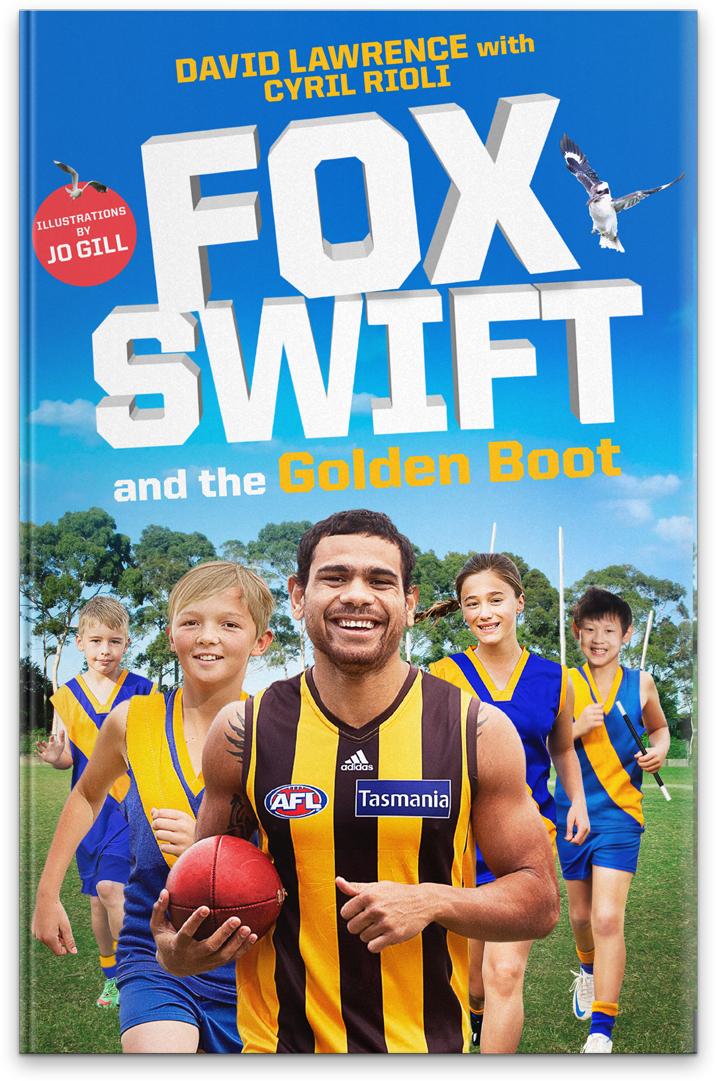 Fox Swift and the Golden Boot

END_OF_DOCUMENT_TOKEN_TO_BE_REPLACED

Going to the Footy

F is for Footy, S is for Speccy

Why I Love Footy