A Tribute to Margaret Mahy

Emily Gale reflects on the loss of children’s and Young Adult author Margaret Mahy, who passed away yesterday aged 76.

By now there are plenty of online and printed tributes to the great Margaret Mahy from people who knew her personally or professionally. The details of her achievements are staggering – a Carnegie medal, the Hans Christian Anderson award, a writing career that lasted 43 years with over 200 children’s books published. But perhaps the best clues as to Mahy’s impact are in the hundreds of comments on Twitter or elsewhere written by people who feel a sense of loss even though they’d never met her.

Everyone wants to talk about their favourite Margaret Mahy book and I’m no different. When I heard of her death I went up to my children’s bedroom and reached for our tattered edition of A Lion In The Meadow, a copy I’ve kept since I was a child in the 1970s (it was first published in 1969).

The little boy said, ‘Mother, there is a lion in the meadow.’
The mother said, ‘Nonsense, little boy.’

Even though it sits on my children’s bookshelves and I called it ‘*our* tattered edition’ it’s really mine of course. This is a book that makes the past rush towards me as soon as I open it, one that lets me recall the feeling of being a child with such a strong sense that it’s almost overwhelming.

I read it to my children a few years ago when they were still young enough to get behind the idea of a lion appearing in a meadow and a doubting mother proved wrong when a dragon appears to trump the lion. And when I did I was able to enjoy it in a completely different way – I’d become the doubting mother getting on with mundane household tasks, no more the imaginative child making friends with a ‘roaring, yellow, whiskery lion’. A book that works for both parent and child in this way is such a magical thing. It has endless lives.

Reading it again I know why my copy managed to survive life in the crazy rambling household of my childhood, plus the three younger siblings who would have tried to get their hands on it and then the countless moves, including the trip from London to Melbourne four years ago. When you find a book like this one, you hold onto it. Fantasy and reality are so brilliantly balanced. As in Judith Kerr’s The Tiger Who Came To Tea, there are no hows or whys or bells-and-whistles, the story simply is as it should be.

That Mahy makes it look so easy is a kind of cruel trick for aspiring writers – if it were anything like easy, this book from 1969 might not still be one that we continue to sell and that children continue to love. 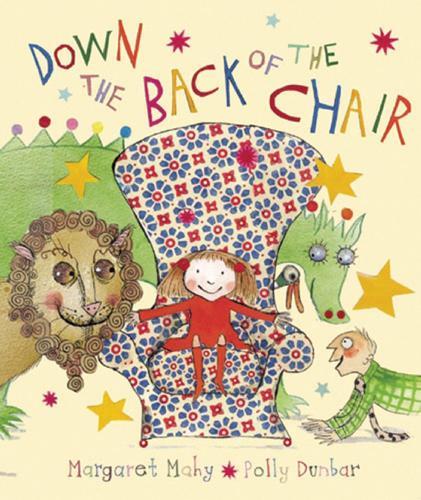 Down the Back of the Chair

END_OF_DOCUMENT_TOKEN_TO_BE_REPLACED

Down the Back of the Chair

When Dad loses his car keys, toddler Mary suspects that they have ended up down the back of the chair, so Dad begins to search. Will the odd assortment of objects he finds be enough to save the family from rack and ruin?

When Carlo and his mother, Jessica, accept a free bus ticket from a strange old woman in the supermarket, they are really only being polite. Secretly they think she must be slightly batty, with her talk about hundred free bus...

The Boy Who Was Followed Home

When a hippo follows him home, Robert is pleased - but his parents are not! As more and more hippos crowd into the garden they turn to a witch for help. Detailed line and pastel drawings and a deliciously understated text combine...