You Will Know Me by Megan Abbott

The interesting thing about Megan Abbott’s novels is that you’re never quite certain about who you should be looking at. There’s the story’s main character, usually a teenage girl who possesses undeniable charisma and influence over those around her. But then there’s the actual protagonist, the close, third-person narrator. This is usually another girl or woman who is always there, next to her charismatic friend/mother/daughter/sister/colleague, studying her closely, inching near but never putting herself directly into the same frame, describing her with a complicated longing – wanting, while not wanting at all – to be the other girl, the one all eyes are on. Abbott executes this so precisely that you find yourself looking there, too. You might see something beautiful, or grotesque, or conniving, or naïve. But what you don’t see is the effect the narrator’s voice in your head is having over everything that happens, the role she is playing, standing off to the side.

I realise that this probably sounds like Megan Abbott has written the same book over and over again, but, believe me, that is not the case. There’s such poise and (I’ve said it before!) precision in this formula, and in You Will Know Me it is executed with a creeping, tense, suspenseful, and feverish narrative skill that I feel Abbott has been building to with all of her previous works.

You Will Know Me is set in a small community in an unnamed American town. At its centre is the BelStars gymnastics academy, and their star athlete, Devon Knox. Devon’s coach, mother Katie, father Eric, and little brother Drew basically don’t take their eyes off her, watching her qualify higher and higher, the Olympics well within her reach. Until one of their own, the handsome and charming boyfriend of the junior tumbling coach, is killed in a hit and run. Things threaten to unravel for all of them as Katie, from whose perspective this story is narrated, tries to keep a hold of her family and her daughter who is the nucleus of their entire world. This novel is fast and fevered and slippery, hard and sharp and hot, and it’s Megan Abbott at her very best. 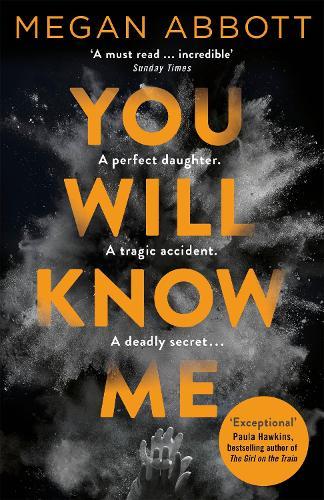 You Will Know Me