The Rainbow Troops by Andrea Hirata

On the Indonesian island of Belitong, young Ikal and his friends attend the local village school through thunderstorm or blistering heat. There are only ten students but, under the guidance of teacher Bu Mus, they develop a love of learning and form aspirations for their lives far removed from the cycles of poverty in which they live. Tiny, brilliant, Lintang, who must cycle over 80 kilometres a day through crocodile-infested swamps to reach school, aims to become Belitong’s first mathematician; Ikal longs to become a writer or a star badminton player.

We also meet Samson, who is obsessed with enlarging his muscles, the mysterious A Ling with the beautiful fingernails, the sweet-natured and bubbly Harun, who has Down syndrome, and the shaman-like artist, Mahar. Ikal and his friends are the Rainbow Troops, bonded by their commitment to the tiny school and the fight to keep it open in the face of corrupt ministerial officials and the nearby mine that will stop at nothing to dredge through the tin-rich land upon which the school lies.

The novel sold over 5 million copies after its 2005 publication in Indonesia, and it’s easy to see why: Hirata’s stories about growing up, friendship, falling in love and learning (not only to dream but to make those dreams reality) are heart-warming and compelling. The Rainbow Troops is more than that, though – it is an exploration of the way that poverty impacts on children’s opportunities and how the poorest families are barred from education, even on an island as commercially rich as Belitong.

Now that The Rainbow Troops, with its simple and conversational writing style, has been translated into English for the first time, we too can experience the struggles and triumphs of Ikal and his friends. 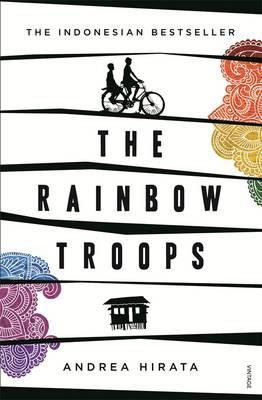