The Palace Letters by Jenny Hocking

Would these historic letters between the Queen and the governor-general about Kerr’s dismissal of the Whitlam government be recognised as Commonwealth records and opened for public access? Could we now, forty-three years later, finally know that history?

On one of my first days at Readings, a phone customer tasked me with grabbing a copy of a Gough Whitlam biography from our bargain table. After tracking down the tome and returning triumphantly to my phone call, I was soon sharply reprimanded after mispronouncing the prime minister’s name. I had been in Australia for a month at that point. Around the same time I was mangling Whitlam’s name, Jenny Hocking commenced action in the Federal Court of Australia seeking the release of the Palace Letters. Thus began Hocking’s four-year legal battle to force the National Archives of Australia to release the correspondence between Governor-General Kerr and Buckingham Palace in the lead up to Kerr’s dismissal of Whitlam. It wasn’t until May of this year that the High Court of Australia ruled in her favour and uncovered a piece of Australia’s political history. The Palace Letters tracks the course of this legal action and reveals the extent of the collusion and the deception behind the dismissal. Just how much did Queen Elizabeth and Prince Charles know in the lead up to the dismissal?

A courtroom drama with political and historical intrigue, it reads like John Grisham crossed with Dan Brown – but more exciting than either because it all actually happened. This is a fantastic read and an important part of Australian history. I finished this book with an intense amount of admiration and gratitude for Jenny Hocking and historians like her who work in the interests of the public and posterity. Former chief justice Sir Anthony Mason may owe history nothing, but history owes Jenny Hocking a great deal. I promise to never mispronounce Gough again. 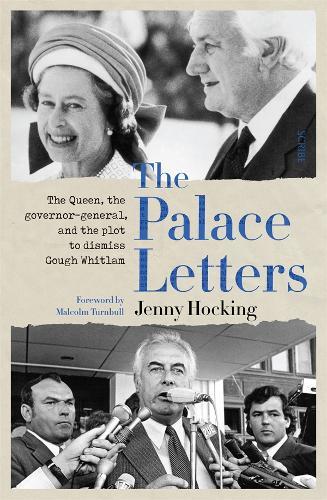