The Last Thread by Michael Sala

‘Australia Fair Lookout. Introspection strictly forbidden,’ reads a favourite Leunig cartoon of mine. I thought of this when reading Michael Sala’s fine debut novel, The Last Thread, for in it he summons a degree of self-examination which our culture is certainly not noted for, and (until J.M. Coetzee arrived on our shores, perhaps) is likewise none too common in Australian letters. Sala, for whom the move to Australia in the 1980s – as a young boy only on the cusp of understanding – was a significant and traumatic upheaval, clearly experienced a turn within almost from the beginning. This book, all these years later, is perhaps the reckoning (one can’t say ‘working out’) he had to have.

The book’s narrative arc is straightforward enough: the dimly remembered early childhood in 1970s Holland of Michaelis/Michael, from whose perspective the story is told, and his older brother Con; their emigration to Oz with their mum and stepdad; a return visit, maybe for good; but then back to Australia, and a hardscrabble upbringing literally at the hands of their stepdad, Dirk, and their Holocaust-obsessed (and in her life-choices seemingly masochistic!) mother Nici.

But I would caution against reading The Last Thread too much in the autobiographical vein. For all we know, everything that happens in the book (and be warned, there are some squeamish moments) happened ‘in reality’, exactly as described; but the fashioning of a self is always about perspectives, about the stories that we tell ourselves and those that are told to us. And it is here where Sala’s storytelling gifts are everywhere on display: from his astonishingly sensitive, steady gaze as young Michaelis tries to process and understand his fissured world, to the vivid tableaux he conjures of the misty Dutch countryside, or the wild lonely seas of Australia’s east coast, or the many and varied faces of the city of Newcastle.

By the end I almost wanted to look away. But as W.G. Sebald has written, ‘the description of misfortune contains within itself the possibility of its overcoming’. This tale could never be written dispassionately – the emotions are too raw, the sadness too heavy – but the filaments of hope that bind and sustain are also everywhere present. The Last Thread is a gutsy, moving, beautifully wrought and utterly compelling work by Sala – a hymn to love that I don’t think will be forgotten by any reader.

Martin Shaw, Readings’ Books Division Manager, is what they call a ‘career bookseller’, which might be an interesting concept as the world turns ‘E’. Formerly an avid fiction reader, now ‘Jolly Jumper’ supervisor to an adorable 7-month-old. Follow him on twitter - @thebooksdesk 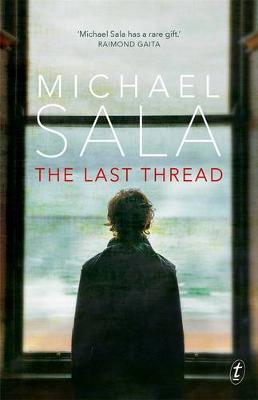