The Good Turn by Dervla McTiernan

The Rúin, the novel which introduced us to Cormac Reilly, an Irish detective transferred to Galway and handed a cold case which leads him to unexpected places, was my stand out crime novel of 2018. The Scholar, released last year, continued his story, allowing us to find out more about our man Cormac. This time, in The Good Turn, the action begins immediately, a young girl is abducted and Cormac’s protégé, Peter Fisher, kills her alleged kidnapper. Unable to prove he had no choice but to shoot and facing prosecution himself, Peter is banished to the small, picturesque village of his childhood. His grandmother still lives there and his father is the local copper, upholding the law any way he sees fit. With nothing better to do, Peter begins to look more closely at the double murder of a farmer and his nephew. Meanwhile, Cormac has been suspended from duty due to his handling of the kidnapping case and it soon becomes clear that his doggedness and determination to do the right thing hasn’t won him any friends. All Cormac and his team want to do is solve crimes and put away the bad guys, but thanks to corruption and politics within the force there are obstacles every step of the way.

It’s early in the year, I know, but The Good Turn is already my favourite detective story of 2020. This is crime as it should be. McTiernan brings her characters to life with a perfect blend of suspense, intrigue and wit. She is also the queen of the atmospheric novel, as the snow starts to pile up around the inhabitants of County Galway you feel the icy fingers of mystery on the back of your neck, and when the weather clears and all is right again in the world of Cormac Reilly and his fellow Garda, you will be warmed down to your very toes. 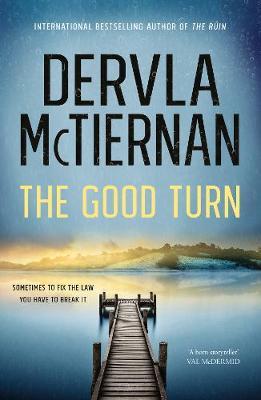