The Anarchy by William Dalrymple

Given the dastardly activities of some of our massive corporations of today, the antics contained within William Dalrymple’s latest offering shouldn’t really come as a huge shock to readers. I say they shouldn’t, but I blanched several times reading this. Hot on the heels of Koh-I-Noor, which was jointly written with Anita Anand, The Anarchy documents the rise of the British East India Company (EIC), over two centuries from 1599 (Elizabethan-era) to 1799.

Basically, when the Brits weren’t going to get anywhere near the mercantile action that the rival Dutch East India Company (VOC) had cornered across South-East Asia, the EIC looked elsewhere: to the Indian subcontinent and its myriad empires, notably the Mughal Empire, and then further afield again. If you’ve seen the fabulous series Taboo, you’ll remember the wheelings and dealings of the EIC to maintain their monopoly and court favour with the monarchy to protect interests in North America. This book is full of historical megalomaniacs whose lust for money and power proved catastrophic for India, directly leading to the British annexation of India and, much later, of Hong Kong. The raison d’être of making money and then obtaining power was at the core of EIC operations in the eighteenth century. The EIC amassed an army of a size twice that of the British Army, and regularly engaged in conflict with rivals including the French East India Company.

Rich in characters and detail, The Anarchy can be read as a prequel to Koh-I-Noor (which details the acquisition o the great Mughal diamond by the British in the nineteenth century, now in the crown jewels), and a pendant to Tharoor’s Inglorious Empire. If this book takes your fancy, also keep an eye out for Dalrymple’s forthcoming volume on paintings by Indian artists commissioned for the EIC. 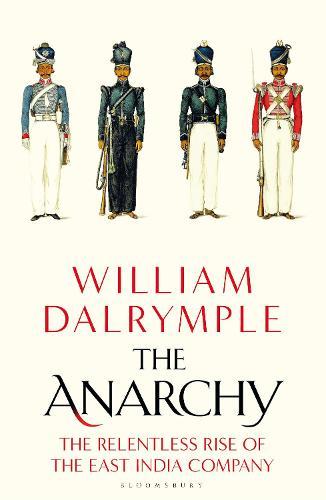