Skin in the Game by Sonya Voumard

Sonya Voumard’s father was a ‘member of Melbourne journalism’s gregarious tribe’. At ten years old, when she was fascinated and spooked by stories of child abductions, her father laid out three newspapers on the kitchen table and they ‘talked headlines, layout and background paragraphs’. Aged thirteen, she was the subject of a scandalous profile about Melbourne teenagers written by ‘Jenny’ (Jennifer) Byrne. And when she finished high school, her godfather, the then director of news at Channel Seven, helped her get a cadetship.

This intriguing, eclectic book is both personal history and investigation into the endangered world of newspaper journalism. Her early immersion in the tribe, and her years as a cadet, press gallery journalist, Queensland correspondent and freelance feature writer stand out as discrete narrative strands that come together to explore the changing art and practice of journalism.

In the book’s most intriguing section, Voumard revisits a (never published) interview she did with Helen Garner for a university assignment: she follows up with Garner decades later, and persuades her to work with her on a collaborative, Paris Review style interview for Meanjin. By taking us inside the process of working with Garner, Voumard generously offers the reader layer upon layer of insight. The section on being interviewed by ‘Jenny’ is similarly fascinating, as Voumard the journalist belatedly turns the perspective back onto the now-renowned interviewer, whose immediate intimacy seduced Voumard’s teenage self into giving more than she meant to (as journalists do). Other particularly pertinent threads in the current climate are Voumard’s accounts of the blatant sexual harassment that was once endured as part of the job, and her sketch of the rampantly bed-hopping Canberra press gallery/political scene.

Skin in the Game would be a great read for any aspiring journalist, and has much to offer any reader interested in how stories are made. 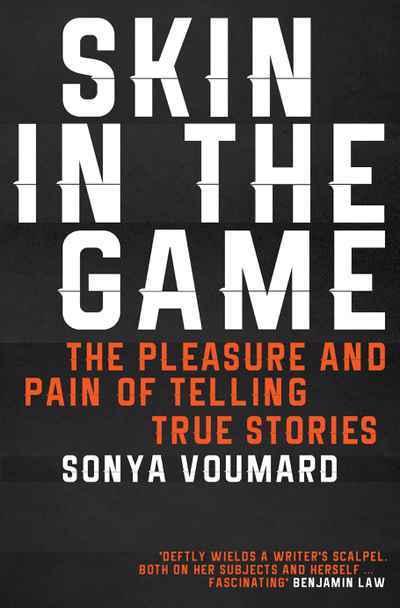