In Neal Shusterman’s latest dark, dystopian epic, Scythe, the age of mortality is over. All inhabitants of earth are now immune from disease, old age and even suicide in their stable, AI-governed utopia which ensures that famine and war will never occur again. The world’s population now lives in total harmony; all knowledge has been acquired and there is nothing left to learn. However, in order to combat the ever-growing population within this utopia, appointed Scythes must carry out random ‘gleanings’ – true deaths from which one cannot be revived.

The novel follows Rowan Damisch and Citra Terranova, two normal 16-year-olds who by chance witness a gleaning performed by the Honourable Scythe Faraday. Impressed by both Rowan and Citra’s compassion and strength during their chance encounter, Scythe Faraday offers them both an apprenticeship, after which one of them will become a Scythe. After they both begrudgingly accept the offer, they are thrown into the mysterious world of Scythedom where they must learn the deadly art of Killcraft and witness numerous gleanings.

Over the course of their apprenticeship, both Rowan and Citra begin to learn that not all Scythes are alike and that Scythedom may not be as noble as they have been lead to believe. So, when a new order of Scythes emerges that takes pleasure in some of the most brutal gleanings imaginable, they are both left to question where their place will lie within Scythedom. If, that is, they survive their apprenticeship. Scythe is an incredibly original book. The world that Shusterman has created is not like anything I’ve read in a YA novel before; it’s dark, philosophical and sometimes incredibly funny. Given the violent content – the body count is astronomic – it’s perhaps best for sci-fi fanatics aged 14 and up. 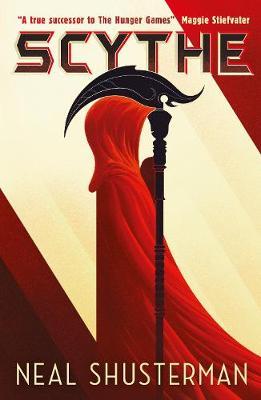