Return to Uluru by Mark McKenna

By most measures Uluru is just a few hundred kilometres from the geographic centre of Australia. The location of the centre fascinated explorers such as Charles Sturt and Cecil Madigan. It’s held an equal fascination for historian Mark McKenna. While the history of Australia’s colonisation centres on the coastal fringe, the harsh centre has never really been ‘conquered’, he argues. For First Nations people, ‘the Centre’ gives them material and spiritual life; for the European invaders, it was something to be tamed. For the Anangu people especially, but for other First Nations people as well, Uluru has the same symbolism and meaning as the greatest religious buildings of Europe. It’s no accident that the historic Uluru Statement from the Heart was delivered from this sacred site. According to Europeans like Madigan, Indigenous life and culture would be swept away by the onslaught of ‘civilisation’. Rather than participate in their decline, ‘the Aboriginal people of Central Australia both enabled European settlement and outlasted it’, argues McKenna.

It was the discovery of a little-known incident in 1934 that changed the way McKenna approached and thought about his book on ‘the Centre’. This incident forms the basis of the narrative to Return to Uluru. In 1934, a Pitjantjatjara man was executed by a group of men for infringing tribal law. Northern Territory policeman Bill McKinnon was tasked with tracking down the murderers and eventually arrested six suspects. On the trip back to Alice, the men escaped and were pursued by McKinnon. One, Yokununna, was wounded and tracked to a cave at the base of Uluru. Cornered, Yokununna threw rocks through an opening and McKinnon fired into the cave fatally wounding the man. McKinnon claimed that he acted in self-defence and didn’t intend to seriously harm Yokununna. A board of inquiry loaded with friends of McKinnon exonerated him.

McKenna delves into the case, including an eyewitness survivor who gives a disturbing account that contradicts the official rulings. In a Queensland garage, McKenna uncovers McKinnon’s meticulous records of his policing career and the truth to the story. This is dark story in our history, but in its discovery, McKenna finds some hope of reconciliation. 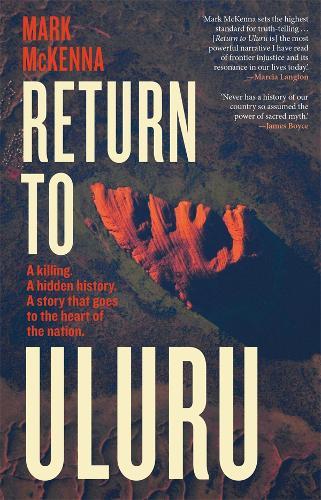