Melbourne on Film: Cinema That Defines Our City by Melbourne International Film Festival

Cities are central to the history of cinema. New York. Paris. London. Hong Kong. All cities with an identifiable, iconic visual language. Cities are both setting and subject. It’s not a stretch to say that cinema created cities – giving them a life that exists somewhere between reality and fantasy.

Melbourne, too, is a cinematic city. We Melburnians love to watch film, and we love seeing our city on screen. 2022 marks the 70th birthday of the Melbourne International Film Festival (MIFF). Returning to cinemas after two pandemic years online, MIFF is celebrating its platinum jubilee with a specially curated Melbourne on Film strand – a selection of well-known and overlooked gems made right here and indelibly associated with Melbourne’s streets. This new collection of essays from some of Melbourne’s favourite writers was commissioned by MIFF to commemorate and illuminate this diverse, colourful history.

The 16 essays take a mostly personal approach. Nostalgia plays its part; cinema as time machine. Judith Lucy, writing on Malcolm, entangles the film with memories of moving here from Perth; Osman Faruqi approaches The Castle via the insularity and racism of Howard’s Australia. As Christos Tsiolkas suggests in his sharp (and personal) introduction, there are many ‘Melbournes’ – even if it seems cameras can’t find their way to the suburbs where most of us actually live – and how we live in it mediates our filmgoing experience.

Ronnie Scott is insightful on Monkey Grip; Mish Grigor bold on Death in Brunswick; Shaad D’Souza surprising on Head On; Tim Rogers perfect to rhapsodise about Dogs in Space. As a uni student in the 1990s, I especially enjoyed Jenny Valentish writing about the University of Melbourne-set Love and Other Catastrophes as a Gen X film and precious record of a frequently diminished and caricatured historical period. Essays on experimental filmmaking, covered by film writers Kate Jinx, Isabella Trimboli and Rebecca Harkins-Cross, venture more deeply into criticism territory, but are thoughtful and accessible. All the essays share an interest in how these films depict Melbourne, as Tsiolkas describes it, at street level and close-up. 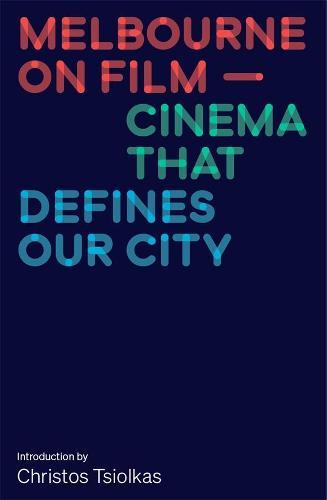