Connie is known to her classmates as the Queen of Slime because every week she shows off a new slime at school. When Connie’s dad suggests she try making her own slime, Connie starts experimenting. She adds some of her Dad’s stinky sourdough mother (very topical and relatable) to her slime mix, and overnight things start to happen …

At first Connie is quite fond of the sentient, foul-smelling and fast-learning slime that she has managed to create. Dubbed Big Yikes, the slime likes to eat ‘tasty hards’ (what it calls pizza crusts) and is actually kind of helpful. It’s not long though before Big Yikes becomes demanding, erratic and very scary, causing chaos at school and rifts among Connie’s friends.

With a big nod to legendary children’s horror series Goosebumps and cinema classics such as The Blob and Gremlins, Horror Heights: The Slime is the first hilarious book in a new series by comedian and telly presenter Bec Hill. It’s creepy and gross and very, very fun, which is exactly how horror for kids should be! 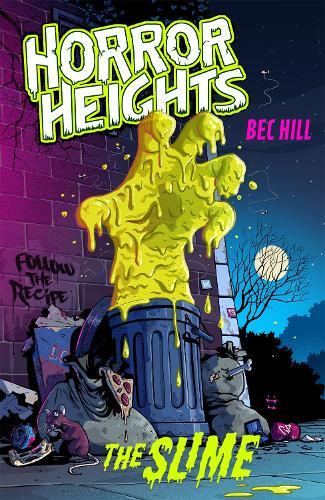